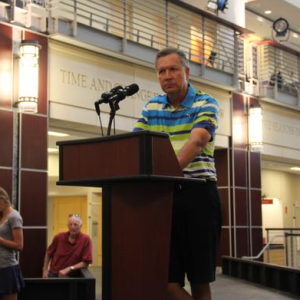 When John Kasich announces for president on Tuesday, the Ohio governor will become the latest Republican candidate banking not on the growing strain of libertarianism in his party, but rather on a revival of “compassionate conservatism,” the more communitarian GOP branding that aided President George W. Bush in the early 2000s.

As the conservative journal National Affairs described in 2009, “compassionate conservatism encouraged Republicans to present themselves as allies of the poor and minorities” and “advance traditionally liberal ends by conservative means.” No Child Left Behind — Bush’s federal overhaul of American education, which, ironically, is now despised by both conservatives and liberals — was a major part of that ideological project.

For Kasich in Ohio, “compassionate conservatism” has meant some high-profile departures from Republican orthodoxy, including expanding Medicare  in an effort to help the poor and pushing back against some of the GOP’s harshest rhetoric related to poverty.

“Because people are poor doesn’t mean they don’t work hard,” he told reporters in 2013.

Vox noted that this comment “doubles as his challenge to the GOP as a whole.” Kasich said:

I respect the fact that you believe in small government. I do, too. I also happen to know that you’re a person of faith. Now, when you die and get to the meeting with St. Peter, he’s probably not going to ask you much about what you did about keeping government small. But he is going to ask you what you did for the poor. You better have a good answer.

This kind of talk has infuriated many conservatives, but it may well be partially responsible for the governor’s approval rating of more than 60 percent in the perennial battleground state of Ohio. The question is whether Kasich’s approach will play well nationally and, most immediately, in the Republican primaries.

One prominent conservative thinker who has spoken encouragingly about the governor is Arthur Brooks, president of Washington, D.C.’s American Enterprise Institute. He told The Washington Post that “Kasich has a great personality. He’s exuberant. He’s enthusiastic. He just likes to try new things. And he’s really unafraid. He’s a person who appears not to have any fear.”

On NBC’s “Meet the Press” earlier this month, Brooks noted that the governor’s rhetoric is the just the kind of political speech he recommends in his new book, The Conservative Heart: How to Build a Fairer, Happier, and More Prosperous America.

At an AEI event promoting the book last Thursday, Brooks said conservatives have one major problem with voters: “People don’t know we care about them.”

“I became a conservative because poverty is what I care about the most,” he told the crowd, noting that capitalism had “saved 80 percent of the world’s poorest people from starvation” over the course of three decades in the 20th century.

One of the things that has most pleased Brooks about the early stages of the 2016 cycle is that Republicans like Jeb Bush and Marco Rubio are arguing about whose policies would be best for the poor.

“Most of the mainstream candidates are doing a good job on this,” Brooks said. “Much better than I’ve seen, certainly, since Ronald Reagan.”

Kasich’s announcement is scheduled for 11 a.m. at Ohio State University in Columbus.