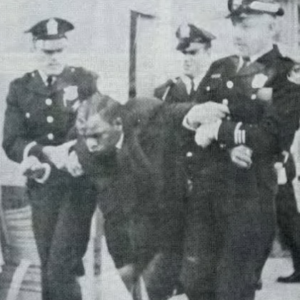 A newspaper photo of John Lewis being arrested by police as he protested for civil rights (via Twitter).
[IS] Opinions

Well, John Lewis — revered Georgia congressman, civil rights icon, spirited son of the South, national moral arbiter — has been doing a lot of that lately … in the awards department.

Lewis made noise in mid-December, as he was named among five recipients of the Newseum’s 2017 Free Expression Awards, which “recognize those who exhibit passion for and dedication to free expression.”

His honor, in particular, is the Lifetime Achievement Award, for dedicating “his life to protecting human rights, securing civil liberties and building what he calls ‘The Beloved Community’ in America.” The award winners will be formally honored during a special event — hosted by chief political anchor Bret Baier of Fox News Channel — April 18, 2017, at the Newseum in Washington.

Lewis recently made history on another front in becoming the first author of a graphic novel to win the coveted National Book Award for Young People’s Literature, titled “March: Book Three,” which he promoted in an appearance recently at the Newseum during a night of recognizing history.

Lewis’ work — fashioned in the style of a comic book with black-and-white illustrations — is the third in a compelling trilogy documenting Lewis’ life, rising from a poor Alabama farm kid who raised chickens to whom he preached the gospel as though they were a congregation to one day meeting President John F. Kennedy in the White House.

The trilogy — now required course reading on teaching tolerance in some colleges — is an illustrated history presented through the lens of the civil rights movement of the late 1950s and 1960s.

The Newseum features a fascinating civil rights exhibit accentuated with the moniker “Make Some Noise.” Those words were gleaned from a Lewis speech during the civil rights movement: “You’ve got to get out there and push and organize and stand up. And make some noise.”

He gave a shout-out to the working press during his Newseum presentation, explaining, “If it wasn’t for the media — the news reporters, the photographers, the cameras — the civil rights movement would have been like a bird without wings.”

Remember, these were the days before the natural connectivity of social media.

Lewis — making it clear and making it plain — spoke of wanting to be “clean” during those battles against the Ku Klux Klan and other emboldened segregationists. That’s why, while a college student at American Baptist Theological Seminary and Fisk University, he bought a $5 suit from a used clothing store in Nashville, Tenn., the attire of dignity that he wore during marches and protests of the 1960s.

Lewis also made history 53 years ago, as he was the youngest (age 23) of the main speakers at the seminal March on Washington on Aug. 28, 1963, an event that culminated on the hallowed steps of the Lincoln Memorial. “I was the No. 6 speaker; Dr. King was No. 10,” Lewis told the Newseum audience.

He’s the lone survivor among the Big 10.

Lewis’ trilogy was co-authored by him, his congressional aide Andrew Aydin and graphic artist/illustrator Nate Powell. Aydin, who appeared with Lewis at the Newseum, serves as Lewis’ digital media director and policy adviser.

Their “March: Book One” became the first graphic novel to receive a Robert F. Kennedy Book Award, in 2014, through the RFK Center for Justice and Human Rights.

During his speech at the Newseum, Lewis enlightened a captivated audience of approximately 500 on a keen topic — his teenage reading about Dr. Martin Luther King Jr. … in a comic book.

An advocacy comic book titled “Martin Luther King and the Montgomery Story” became a major inspiration for the then-17-year-old Lewis. The Dr. King comic idea was hatched in 1956 by New York-based author Alfred Hassler, a pacifist journalist and anti-war activist. Though the comic book, which received Dr. King’s blessing, was first released in December 1957, many in the South didn’t see it until early 1958. It was disseminated to labor unions, churches, schools and peace groups.

The comic documented Dr. King’s involvement in the influential Montgomery Bus Boycott following the arrest of civil rights pioneer Rosa Parks on Dec. 1, 1955, a transformative episode that essentially became the springboard toward the modern-day civil rights movement. The comic book featured 16 pages; it cost 10 cents; it provided the impetus for Lewis’ “March,” which has since been translated into multiple languages for global use.

Yes, even Dr. King was a comic-book superhero.

Aydin related, “We found out that Dr. King was a comic book editor, too. He offered his critique of the ‘Montgomery Story.’ He made editing suggestions.”

Lewis, 76, suggested somewhat wistfully during the question-and-answer session that night at the Newseum, “We need to find ways to humanize our society; that’s what we did during the civil rights movement. I am still optimistic about our country, despite the recent election.”