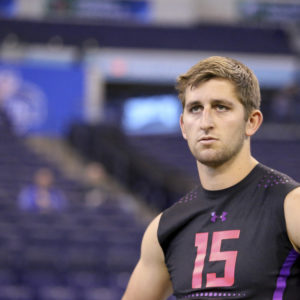 Josh Rosen Too Rich, Too Smart for the NFL

The whispers: too affluent, too many options in life, too much intellectual curiosity.

When they say shut up and play, he isn’t listening, and he’s made that known in explicit fashion.

That’s the intel report on Josh Rosen, a scary-good quarterback from UCLA.

When they say white athletes are immune to stereotypes, think again. Just check out the Josh Rosen Saga, a fascinating study of wealth, academics, free speech, sports talent, and perception.

Rosen’s parents are all Ivy — his 6-foot-2 father, Dr. Charles Rosen, graduated from the University of Pennsylvania; his 6-foot mother, Elizabeth, went to Princeton, where she played lacrosse.

Dr. Charles Rosen is an internationally renowned spine surgeon and educator who is at the cutting edge of his discipline. He is the founding director of the University of California-Irvine Spine Center and a clinical professor of orthopedic surgery. And he was a candidate to be the U.S. surgeon general during the Barack Obama Administration.

Elizabeth Lippincott has been a book and magazine editor. Her father was the president and CEO of the J. B. Lippincott publishing company, which was founded by his great-grandfather Joshua B. Lippincott. Her mother was the curator of American decorative arts at the Philadelphia Museum of Art, home of the “Rocky Balboa” statue. And Elizabeth Lippincott is a great-great-granddaughter of Joseph Wharton, the industrialist who founded the prestigious Wharton School of Business and Economics at the University of Pennsylvania.

Charles and Elizabeth won national gold medals in ice dancing in the 1970s; their wedding announcement even made “The New York Times”; he’s Jewish and she’s a Quaker.

And their son, Joshua Ballinger Lippincott Rosen, is the uber-talented quarterback from Los Angeles’ Westwood side of town. Despite his intellectual and financial “baggage,” he is expected to be one of the first 10 college players selected in the April 26 NFL Draft.

Why? Because there still is a qualitative premium on rare talents in pro sports.

And potential franchise quarterbacks in the NFL are as difficult to discover as Geraldo Rivera actually finding dead bodies or treasure troves in gangster legend Al Capone’s much-publicized vault, which ultimately turned out to be empty. Metaphorically, there are many “empty” quarterbacks in the NFL, thus the great demand for them.

Some hail the polished Rosen, 6-foot-4, 220 pounds, as the league’s next Tom Brady, the five-time Super Bowl-winning superstar technician at quarterback for the New England Patriots.

But unlike Brady, Rosen, called “The Chosen Rosen,” is at the epicenter of a wildly idiosyncratic controversy. Not because of anything he’s done to make the police blotter.

It’s because of his mind-power.

Any interested readers should peruse the Rosen opus on the sports website “Bleacher Report.” The headline aptly reads, “A Beautiful, Brash Mind: Josh Rosen isn’t holding back — even if the NFL thinks he should.” Yes, the headline sounds uniquely similar to the story of Nobel Prize-winner John Nash, the brilliant mathematician played by actor Russell Crowe in the Academy Award-winning movie. But there’s more to this Rosen story . . .

Every college player entering the annual NFL Draft is the focus of reports culled by league scouts; some consider the completed dossier a de facto Bible on incoming prospects.

Matt Miller, who covers the NFL scouting game for “Bleacher Report,” recently wrote this about Rosen:
“Josh Rosen is outspoken. He wore a ‘F–k Trump’ hat to one of the president’s golf courses before Trump was elected. In an interview with Bleacher Report’s Matt Hayes, Rosen talked about the difficulties of being a student-athlete. Scouts, coaches and teammates have also told me of his personality, which can come across as ‘uncoachable, smarter than all of us and a prick.’

“In an age when, thanks to social media, players are under a larger spotlight than ever, how will the NFL perceive Rosen?

“One scout I spoke with said when he looks at Rosen, he sees another version of Colin Kaepernick.”

Miller continued: “If scouts are already associating Rosen with Kaepernick, there’s no doubt his off-field views will affect his draft standing for at least some teams. It’s a situation unlike any other I can remember, where a draft prospect could be removed from boards for an opinion and not a crime or alleged crime.”

That trio isn’t exactly Drew Brees or Russell Wilson or Carson Wentz, star NFL quarterbacks whom many undoubtedly would prefer to be on Rosen’s list.

Academically, Rosen reportedly is a B-plus economics major, with an eye on MBA school for the future.

Rosen is well-rounded, erudite, sophisticated, yes a deep-thinker . . . and he has repeatedly professed his love for the game.

Yet, there still is that lingering question: Is he all in?

The NFL appears to prefer desperate players, meaning their only option is pro football.

Why the hunt for all these desperate young men?

Well, the logic: A desperate prospect with no other viable options in life presumably will focus 100 percent on football — and with intense passion and ultimate survivor skills.

That ostensibly means desperation sells best in the NFL’s view.

But Rosen aims to make mind-and-money a best-seller, too.