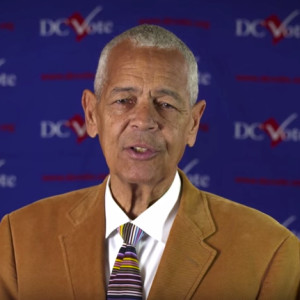 D.C. statehood advocates were among those who honored the late civil rights icon Julian Bond this past week, including at a Saturday ceremony at the Martin Luther King Jr. Memorial on the National Mall.

Bond, who died Aug. 15 at the age of 75, lived a storied activist life as a founder of the Student Nonviolent Coordinating Committee, the first president of the Southern Poverty Law Center and chairman of the National Association for the Advancement of Colored People. In addition, he championed the anti-war, gay rights and environmental movements as well as the cause of statehood for the District of Columbia.

On Saturday afternoon, Bond was remembered by the District’s non-voting congressional delegate, Democrat Eleanor Holmes Norton — a friend and fellow SNCC veteran who worked with him for decades on civil rights causes. Speaking in front of the national monument of King — who taught Bond at Morehouse College — Norton reminded a crowd of Bond’s admirers how he advocated for D.C. residents to have voting representation in Congress.

“Remember Julian in any way you please, but please do not forget to remember Julian Bond, resident of the District of Columbia, champion of voting rights and statehood,” she said. The congresswoman then joined the crowd in honoring Bond by throwing flower petals into the Tidal Basin.

A recent example of Bond’s activism on behalf of the District was his 2014 public service announcement for the advocacy group DC Vote. In the message, which was played in D.C. taxi cabs, Bond welcomed tourists to a city “where more than 630,000 Americans are second-class citizens.”

DC Vote Executive Director Kimberly Perry spoke along with Norton on Saturday. She told InsideSources that Bond will be remembered for expanding the civil rights movement by building bridges between issues. For example, she said, “He built bridges between the African-American community and the gay community at a time when that was not popular. He took some risks, and he knew it was worth it, and he knew it was the right thing to do.”

In a separate interview, Norton told InsideSources that Bond will also be remembered as a uniquely effective communicator in the civil rights movement.

“He had a way with words, so he could frame our issues,” she said. “The Julian Bond that became such an eloquent speaker around the country and around the world began when he dropped out of Morehouse College to become a founder of the Student Nonviolent Coordinating Committee.”

Norton noted that Bond cautioned subsequent generations of activists against dropping out. He worked with students while teaching at several respected colleges and had ongoing campus conversations about civil rights, most recently related to the Black Lives Matter movement.

One of Bond’s last projects was participating in a documentary film about philanthropist Julius Rosenwald, who built schools for black students in the South during the early 20th century. Bond appears in the film, talking about how his father received a Rosenwald fellowship.

Bond’s family said the cause of his death was complications from vascular disease.