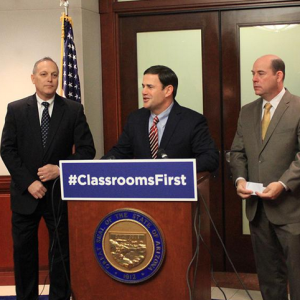 What Just Happened in Arizona?

Arizona is a state known for epic legislative battles – and equally epic mis-steps.

This is a state where legislation produced an economic boycott in 2010 over SB 1070, the anti-immigration law that has subsequently been largely dismantled by the courts; and a black eye in 2014 from SB 1062, a “religious freedom” bill sponsored by social conservatives that became a national piñata for what many argued was discrimination against gays. Then-Governor Jan Brewer vetoed the bill.

The budget fights have been equally eventful.  Medicaid expansion consumed the legislature in 2013, with Brewer publicly threatening to veto every bill that came to her desk until a pro-Medicaid budget passed.  When the legislature ran out of time, she called a special session to force through Medicaid expansion, humiliating her own party’s leaders in the process.  It was a bloodbath, and hard feelings lingered long after the gavel came down.

There won’t be the usual end-of-session histrionics this year because this weekend Arizona passed a budget earlier than it ever has in the state’s modern history.  It’s the second state in the country – after Virginia – to pass a budget in 2015.

The budget just passed largely mirrors the one unveiled by newly-elected Gov. Doug Ducey on January 16.  The state’s current budget is a mess – estimates were that it was approximately $1.5 billion out of balance.  Not any more.

“We’re going to balance the budget, and we’re going to have a structural balance. This is the first time since 2007 that has happened,” said Ducey in an interview with InsideSources.

Ducey’s original budget included a near-doubling of the vehicle registration fee, from $8 a year to $15 a year.  That was its only proposed revenue enhancement, and even that modest increase was stripped out of the final budget.

The process started Wednesday and consumed more than three days.  The real voting began Friday evening, starting around 9:30 pm Arizona time, and stretched into Saturday morning, finally ending around 8:30 in the morning.  More than fifty amendments were voted on, and the final tallies were 32-27 in the state house and 16-13 in the senate.

There was near-universal skepticism that budget passage could be completed before the weekend.  As a result, other than legislators, the chambers were largely empty during the votes, including a noticeable lack of lobbyists.

“The lobbyists and special interests were largely asleep at the switch,” said one local observer who preferred not to incur the wrath of the lobbying community.  “From the governor’s perspective, the timing couldn’t have been better.  His staff was everywhere, and the lobbyists with the best ability to cause trouble and push back were AWOL.”

No one emerged unscathed from this budget.  Charter schools, which were presumed to be a favorite of the governor, felt the pain in addition to everyone else.  They rushed into the fray with an attempt to protect their share of the budget during the final hours, but they were not spared.

One definite loser in the budget battle was Arizona State University President Michael Crow.  An ill-timed e-mail from Crow to ASU alumni likely resulted in an additional $24 million in cuts to higher education, from the $75 million the governor originally proposed to $99 million in final passage.  His influence in the state is on the wane.

Whether this marks the beginning of a new era of a more-efficient government in Arizona remains to be seen.  Those who decried the legislative chaos of prior years are now bemoaning the speed and “lack of transparency” from the three-day process and early-morning votes, despite the fact that the governor’s budget proposal has been public for more than seven weeks. 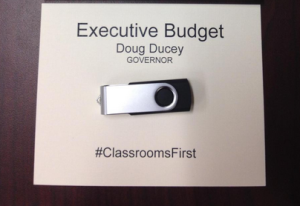 Flash drive provided to every member of the Legislature with Ducey’s budget proposal.

The governor’s office is busy touting this as a bi-partisan budget, though only one Democrat in either chamber voted for it. “There were efforts to reach across the aisle, and they were successful. We were happy to have both Republicans and Democrats vote for the budget,” stated Ducey.

“This is a remarkable change from business-as-usual in Arizona,” said Glenn Hamer, CEO of the Arizona Chamber of Commerce and Industry, which took no position on the budget.  “The governor ran as a businessperson and made it clear he’d get the state’s fiscal house in order.  It’s been a very good two months in office for the governor.”

Hamer noted that everyone would rather see a situation in Arizona where there were huge budget surpluses. That’s not the hand Ducey was dealt. But he points to measures in the new budget to protect taxpayers, strengthen schools, and continue to phase in tax reductions. “The vast majority of the business community understands and appreciates that the Governor did the difficult work, brought the legislature together, worked for better K-12 education, and created a better business environment,” explained Hamer.

The final impact of the budget may be in doubt, but Ducey is making it clear from early in his administration that he intends to change how Arizona does business.