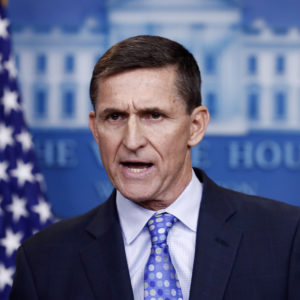 Just How ‘Intelligent’ Is Michael Flynn?

WASHINGTON — You have to wonder about Michael Flynn, the retired Army lieutenant general who served as President Donald Trump’s national security adviser for 24 days before he was forced to resign. He had spent his 33-year military career as an intelligence officer but was dumb enough to lie to the FBI about his contacts with Russians before Trump’s inauguration, and now he’s pleading guilty to having made “false, fictitious and fraudulent” statements.

How could a guy have reached such heights in the U.S. military establishment and turn out to have been such a liar? For that matter, what “intelligence” was he offering during his long career in which he rose to director of the Defense Intelligence Agency and chairman of the military intelligence board? Did he know what he was talking about — or just how to play politics on the military ladder? And what did he think he was doing serving as an analyst for RT (Russia Today), infamous for broadcasting propaganda directed at the United States, then breaking bread with President Vladimir Putin and accepting hefty fees for talks in Moscow?

The questions surrounding Flynn go to the heart of the Trump presidency. The reason he agreed to plead guilty was that he will then be willing to testify in the growing investigation that Robert Mueller, a former FBI director, is conducting surrounding Trump’s Russian connections. By cooperating, Flynn may get off with a wrist slap, a suspended sentence, rather than jail time.

The net surrounding the Trump presidency, however, is tightening. Trump now denies he ever asked James Comey, the FBI director whom he later fired, to let up on Flynn. Trump also persists in trying to deflect attention by raving on about the “lies” that Hillary Clinton made as secretary of state. Clinton may be no angel, but Trump is the one who’s in trouble.

As a witness, though, Flynn may not be reliable. He has demonstrated his lack of both integrity and intelligence by his response during the FBI investigation before and during his brief tenure as national security adviser. Trump’s best hope, rather than defending Flynn, may be to show this career “intelligence” officer was not only not intelligent but also not trustworthy.

That does not mean, however, that some of the other retired military people whom Trump has appointed are not to be trusted. As defense secretary, Jim Mattis, retired Marine general, has mingled tough talk with warnings of the holy hell that attacking North Korea, even in the form of a surgical “pre-emptive strike” on its nuclear and missile facilities, would provoke.

As testimony to the regard in which Mattis is held, I would refer to a conversation with William Perry, defense secretary during the Clinton presidency, who wrote a widely quoted report at the time of what to do about North Korea. Perry, now 90 years old, balances caution with calls for strengthening U.S. forces in Korea for defensive purposes. When I asked Perry, after a talk at the Arms Control Association in Washington, what he thought of Mattis, he told me he knew him and believed in him. He did not think that Mattis was eager for war but knew the risks.

Perry seemed less sure, however, of Flynn’s successor as national security adviser, H.R. McMaster. Like Flynn, McMaster rose to the rank of lieutenant general in the army; unlike Flynn, McMaster has yet to retire. He is still an Army general, meaning he’s not fallen into the pit of easy money from the Russians or other dubious sources. He has, however, acquired a reputation as a hawk, labeling “the rogue regime in North Korea” as “the greatest immediate threat to the United States and to the world” after the North’s latest ICBM test and warning the “potential for war increases day by day.”

That’s not to say that McMaster’s views on North Korea are incorrect. Between them, Mattis and McMaster, and White House chief of staff John Kelly, also a retired Marine general, may have exercised a restraining influence since Trump talked about inflicting “fire and fury” on North Korea.

Some knowledgeable observers believe that Trump, having known nothing about Korea until becoming president, may now be aware of the need for weighing the odds. “We have to deal with North Korea as it is, not as we wish it would be,” said Perry in his talk at the Arms Control Association. Luckily Trump will not be taking advice from the non-intelligent Flynn while facing the complexities of what to do about North Korea.