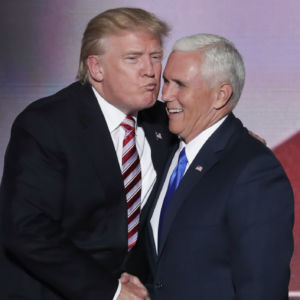 For the supporters who voted for John Kasich, Ted Cruz and Marco Rubio in the New Hampshire primary, they’ve been reluctant to switch presidential nominees. In fact, they’ve steered clear of Donald Trump and many of them are choosing Libertarian presidential candidate Gary Johnson instead.

A recent poll from Emerson College found that in the Granite State, only 42 percent of Kasich, Cruz, and Rubio supporters have changed their vote to Trump. Democratic presidential nominee Hillary Clinton received about 19 percent of those voters and Johnson took a significant amount with 30 percent. These numbers are driven by overwhelming opposition to Trump from Kasich supporters.

The 42 percent of voters who have switched to Trump is actually the lowest in the New England area. Compare that to neighboring Vermont (49 percent) and Maine (48 percent). In turn, their support in New Hampshire for Johnson is one of the highest. Only support for Johnson in Vermont (33 percent) is higher.

“We raised the question about divisive primaries having lasting impacts on presidential campaigns and we found the hypothesis didn’t really exist,” said Spencer Kimball, polling advisor at Emerson.

Kimball said even after “rough” primaries in 2008, the parties were still able to unite and supporters fell into line, voting for their nominee.

“Living in this moment, we thought these primaries seem a little different,” he said. And they measured how these different factions in the Republican Party have not united under Trump.

So why are these candidates’ supporters not on board the Trump Train?

These candidates, in particular, have been very vocal about their dislike of Trump. Kasich and Cruz have not endorsed Trump. Rubio does endorse him, but he’s facing a reelection race in Florida. Like other vulnerable Senate Republicans, Rubio has offered tepid support for Trump.

For Rubio, he and Trump had some of the most fiery debates during the primaries, from Rubio saying Trump is “a con artist” to Trump’s “little Marco” name-calling.

But the biggest wave of Republicans not supporting Trump comes from the Kasich camp. Kasich was one of the more moderate Republicans in the 2016 primaries, and his strongest region was the Northeast, attracting well-educated liberal to moderate Republicans. As a result, he finished second in the NH primary.

According to the Emerson poll, Trump is going to have a hard time winning over these voters.

Cruz voters predominately went to Trump, at 70 percent, and only 17.4 percent went to Johnson. Rubio’s numbers were also very similar — 73 percent for Trump and 18 percent for Johnson.

Rubio and, especially, Cruz attracted a more conservative voter during the primary. In a June FiveThirtyEight/SurveyMonkey poll, Trump earned 90 percent to Clinton’s 5 percent among Republican and Republican leaners who self-identify as conservative. It appears that Trump is doing better with the conservative base of the Republican Party.

A lot of Kasich supporters don’t feel there is a place for them in this “new” party. As the party becomes more “conservative,” a lot of liberal and moderate Republicans are looking for someone to support and that’s where Johnson comes in.

Johnson’s running mate, former Mass. Gov. Bill Weld, endorsed Kasich in February. The Libertarian Party is attracting a lot of the NeverTrumpers from the Republican Party, anti-Clinton voters and even the #FeeltheBern crowd of upset Bernie Sanders voters. These voters tend to fall in the general political spectrum of socially liberal, fiscally restrained policies, which is a lot of the voters in the Northeast.

Since Kasich did well in these parts, it’s no surprise that many of his voters are looking for someone else who shares more of their beliefs.

Can Trump win without these voters? Especially in New Hampshire, where the polls are tight, it will come down to who shows up on Election Day.

In the latest NBC News/Marist poll released Sunday, Clinton leads Trump 39 to 37 percent and Johnson took 15 percent. Even though the Granite State has only four electoral votes, presidential candidates and their teams are making more trips to solidify their base and attract independent voters in order to get the 270 electoral votes needed for the White House.