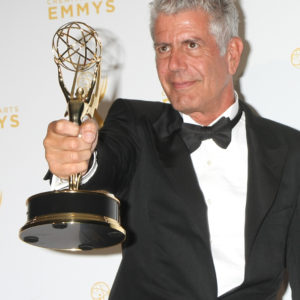 Kate Spade used a red scarf; Anthony Bourdain did it with a belt from a bathrobe. The two well-known celebrities used those inconspicuous items to kill themselves within a four-day span.

Spade was an internationally acclaimed, top-of-the-line clothing designer known for her cool, colorful handbags — and unusually affordable prices for a wide swath of women; Bourdain was a television foodie who connected vast segments of the world through the conduit of cuisine via his CNN show, “Parts Unknown.”

Both died before reaching Social Security age — Spade was 55, Bourdain 61. Both were on top of the world, or so we thought. Do we really know why Spade and Bourdain killed themselves?

No, we don’t; we’re still left with looks of incredulity.

But, of course, that hasn’t ceased the rampant speculation. Whenever a person dies by suicide, the first question from the masses usually is, “Why?” The second question is, “How did they do it?” The third question is, “What made them so unhappy in their place in life at that particular moment?”

The word “happiness” has been transformed into a class at Yale University. We all know that stress begins early for students trying to enter highly selective colleges, such as Yale and other super-prestigious schools. And when they get to those colleges, the anxiety only increases because of grades, competition and the desire to land that dream gig following graduation.

Dr. Laurie Santos is the creator and lecturer of class Psyc 157, or “Psychology and the Good Life.” Also known as the “Science of Happiness 101.” Also the most popular class in Yale’s academic history.

Approximately 1,200 students meet twice a week for lectures by Santos, who earned her psychology and biology degrees from Harvard. That means about 25 percent of Yale’s 5,500 undergraduate students enroll in her class.

Those statistics alone show how important happiness is to humankind. It’s a course held in a converted church, pews and all. A class so big that it requires multiple rooms to accommodate the students. When the class has to meet in one venue, it uses the Yale concert hall. And Santos — a professorial rock star — probably is the most popular teacher in the United States, if not the world, right about now.

Asked if people today are having more difficulties than ever before in handling stress and setbacks, Santos said: “I think there’s a lot about the modern day that doesn’t promote happiness. Research shows that happy people prioritize a lot of things that are hard to achieve in our hectic daily lives — we don’t spend as much time with friends, we don’t have time for ourselves, and it’s easy to get caught up with our smartphones rather than taking time to be in the present moment.”

After the deaths of Spade and Bourdain, several national news outlets quoted various statistics on suicide from the Centers for Disease Control and Prevention. The most startling one was this: “The suicide rate in the United States has grown nearly 25 percent since 1999. Between 1999 and 2016, suicide rates increased significantly in 44 states with 25 states experiencing increases of more than 30 percent.”

In the inquisitive words of Motown monument Marvin Gaye, “What’s Going On?”

Dr. Crystal Clark is an assistant professor at the Northwestern University Feinberg School of Medicine. More specifically, she is a psychiatrist, with a background in behavioral sciences, and is an appointed member of Northwestern’s Department of Obstetrics and Gynecology.

Clark said: “I wish I could say there is a simple answer. But there’s not. Either we are becoming more aware of suicide and it’s being reported more or there is a true increase. And some people aren’t getting the mental health care they need.”

“Either it’s a stigma issue or an access issue.”

Bottom line: “We have a major public health crisis on our hands,” Clark added.

Phone calls and text messages to some U.S. suicide-prevention hotlines reportedly have more than doubled since the deaths of Spade and Bourdain. The iconic Helen Keller once said: “When one door of happiness closes, another opens; but often we look so long at the closed door that we do not see the one which has been opened for us.”

To that, Santos, the “Happiness” professor, responded, “I think she’s nicely capturing what scientists refer to as a negativity bias — it’s easy to notice the bad stuff and the hassles in life, but it’s harder to notice the benefits we have.”

Spade’s net worth reportedly was $150 million to $200 million; Kate Middleton, the Duchess of Cambridge, was one of the most loyal users of her fashion products. Bourdain was an accomplished chef, author, world traveler and television personality with four Emmy Awards; by midnight on the day his suicide first circulated among news outlets, six of the top-selling books on Amazon were written by Bourdain.

But there is an adage that goes something like this: You don’t know if the roof is leaking until you live inside.

That is to say, despite outward appearances, one truly doesn’t know a person’s pains, joys, failings or inner feelings. Perhaps that compelling description applied to Spade and Bourdain.

There is something else that we know for sure: Everyone has demons in some way, shape, form or fashion — something they are running from or running toward. And the direction you go often determines your fate.

Asked if she gleaned any clues, enlightenment or conclusions from the fact that neither Spade nor Bourdain used firearms in their suicides, Clark said no, other than the method of choice was the same by the two celebrities — death by hanging.

Clark said 40 percent of her medical practice at Northwestern University comprises suicidal patients, meaning those who have had suicidal thoughts, suicidal tendencies or have attempted suicide. They are rich, poor and everyone in between.

For those with high-profile positions like Spade and Bourdain, there’s the added POP Factor, which can be more burdensome than the everyday stresses and strains felt by us regular folk.

Said Clark, “Both of them faced the pressures of performance. And, unlike most of us, their pressures were under the international spotlight.”

In the search for happiness, what are people really looking for?

Answered Santos, “The problem is that people often look for things that won’t make us as happy as we think. We often want to change our life circumstances — get a better job, or a new house, or a new car — when reframing our mindset would be more powerful. We also don’t seek the things that really would make us happy — like time to spend with friends and loved ones, or time to experience gratitude. The problem is we seek the wrong stuff.”

And there’s one more thing: Because of the growing global buzz about Santos’ “Happiness” class, the course now is available online — “It’s going great. We have over 120,000 learners from over 160 countries.”

You can learn more here: http://www.coursera.org/learn/the-science-of-well-being