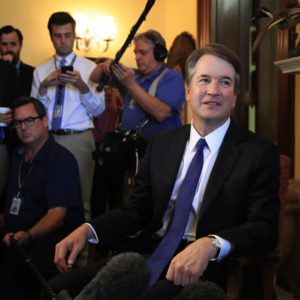 The confirmation hearing for Supreme Court nominee Brett Kavanaugh provides an excellent opportunity to examine both the role of the judiciary in our constitutional scheme and the problem of an expanding administrative state.

Throughout the more than 300 opinions Judge Kavanaugh wrote during his 12 years on the U.S. Court of Appeals for the D.C. Circuit, he frequently addressed both issues, decrying blind deference to federal bureaucrats as an abdication of judicial duty and a violation of the constitutional separation of powers.

Kavanaugh’s views on the separation of powers problem created by the ever-expanding expanding administrative state were framed explicitly in his opinion in In re Aiken County (2013), ruling against the Nuclear Regulatory Commission:

“This case raises significant questions about the scope of the Executive’s authority to disregard federal statutes. … The underlying policy debate is not our concern. The policy is for Congress and the President to establish as they see fit in enacting statutes, and for the President and subordinate executive agencies (as well as relevant independent agencies such as the Nuclear Regulatory Commission) to implement within statutory boundaries. Our more modest task is to ensure, in justiciable cases, that agencies comply with the law as it has been set by Congress.”

Of course, Congress does not always write clear laws. That’s where the Chevron doctrine comes in, instructing courts to defer to a federal agency’s statutory interpretation and policy judgments where a statute does not clearly address the question at issue. The doctrine, originating in the 1984 Supreme Court ruling Chevron v. Natural Resources Defense Council, has evolved to allow administrative agencies to expand their authority under the cover of statutory ambiguity.

Kavanaugh has expressed concern with the overly broad application of Chevron deference that often occurs when agencies expand their regulatory reach and issue sweeping interpretations of the scope of their own authority. He has consistently stressed that there are constitutional limitations on agency deference.

Most notably, Kavanaugh has invoked the major rules (or major questions) doctrine, which holds that courts should not defer to the interpretation of administrative agencies when their rules implicate major questions of economic or political significance that are not clearly addressed by the underlying statute. One such rule is the FCC’s 2015 Open Internet Order, requiring “net neutrality.” As described by Kavanaugh in his dissent in United States Telecom Association v. FCC (2017):

Kavanaugh’s dissent from the denial of a rehearing en banc explained that Congress never instructed the FCC to implement net neutrality regulations through “common carrier” classification and “an ambiguous grant of statutory authority is not enough.” The court’s inquiry should end there:

“Under the major rules doctrine, that is the end of the game for the net neutrality rule: Congress must clearly authorize an agency to issue a major rule. And Congress has not done so here, as even the FCC admits.”

Instead, the FCC purported to find an elephant in a mousehole when determining the scope of its own regulatory reach.

At the confirmation hearing, questions about Kavanaugh’s dissent in this case will undoubtedly delve into the policy arguments for and against net neutrality. That is certainly the prerogative of the senators asking the questions. However, to be clear, Kavanaugh’s dissent is unconcerned with the policy implications of net neutrality or any other regulation. Instead, it is focused on statutory interpretation and to the proper role of an administrative agency.

Similarly, in another dissent from a denial of rehearing en banc, Kavanaugh recognized in Coalition for Responsible Regulation v. EPA (2012) that the underlying policy debate about greenhouse gas regulations for power plants was outside the proper scope of a judge’s analysis. Kavanaugh focused, instead, on the issue of constitutional authority, arguing that the Environmental Protection Agency’s issuance of such rules exceeded its authority under the Clean Air Act.

Specifically, Kavanaugh wrote that courts should “not lightly conclude that Congress intended” to “impose enormous costs on tens of thousands of American businesses, with corresponding effects on American jobs and workers.” The Supreme Court adopted this argument in a separate case two years later.

In a partial dissent in White Stallion Energy Center, LLC v. EPA (2014), Kavanaugh again addressed the EPA’s assumption that the power granted to it under the Clean Air Act includes the authority to ignore the costs imposed by its regulations. Kavanaugh noted that, to the contrary, Congress instructed that the EPA could issue only the relevant regulations if studies found they were “appropriate and necessary,” which necessarily includes consideration of the costs to society.

Kavanaugh explained why the EPA does not have the discretion to ignore a cost-benefit analysis:

“Suppose you were the EPA Administrator. … Your only statutory direction is to decide whether it is ‘appropriate’ to go forward with the regulation. Before making that decision, … you would certainly want to understand the benefits from the regulations. And you would surely ask how much the regulations would cost. You would no doubt take both of those considerations — benefits and costs — into account in making your decision. That’s just common sense.”

Noting that the EPA’s own calculation predicted the costs of the new regulations to be “$9.6 billion a year — that’s a billion with a b,” Kavanaugh concluded that it was “unreasonable for EPA to exclude consideration of costs” when “deciding whether it (was) ‘appropriate’ — the key statutory term — to impose significant new air quality regulations on the Nation’s electric utilities.”

One year later, the Supreme Court vindicated Kavanaugh’s argument in Michigan v. EPA (2015). Writing for the majority, Justice Antony Scalia cited Kavanaugh’s dissent, quoting his explanation that “appropriate” is “the classic broad and all-encompassing term that naturally and traditionally includes consideration of all the relevant factors.”

But let’s be clear: The blame for the ever-expanding and overreaching administrative state does not lie solely with executive agencies. When Congress uses malleable or ambiguous terms like “appropriate,” without further explanation, it empowers federal bureaucrats to exploit the uncertainty as a license to do more, despite the command of the major rules doctrine that doing less is the appropriate response to ambiguity when much is at stake.

James Madison famously articulated this concern in Federalist 62, writing that:

“It will be of little avail to the people, that the laws are made by men of their own choice if the laws be so voluminous that they cannot be read, or so incoherent that they cannot be understood; … Law is defined to be a rule of action; but how can that be a rule, which is little known, and less fixed?”

Accordingly, liberty requires that when a statute lacks clear instructions for making rules or a clear grant of authority to promulgate such rules, federal bureaucrats should proceed with caution and restraint rather than rush into a vacuum left by Congress. A tendency toward the latter is the major problem of the administrative state, and it is one Kavanaugh will continue to address when he joins the nation’s highest court this fall.

Ashley Baker is the director of public policy at the Committee for Justice.