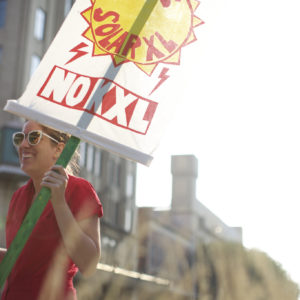 Protests come at a steep price. According to a new report from the U.S. Chamber of Commerce’s Global Energy Institute (GEI), the Keep It In the Ground movement, which calls for “an immediate halt to new fossil fuel development,” helped prevent at least $91.9 billion of economic activity in the United States, costing hundreds of thousands of jobs, and time that cannot be regained.

The Keep It In the Ground movement (#KIITG) is an alliance of more than 400 organizations, including most of the big names of the environmentalist movement–350.org, Greenpeace International, the Center for Biological Diversity, Earthworks, etc. Founded in 2015, it is pushing for governments to pursue a “just transition to renewable energy.” In the meantime, they are vocal opponents of energy infrastructure construction, activism which is costing states and local communities millions of dollars.

“Overall when we look at the issue, there are a bevy of negative consequences when energy infrastructure doesn’t get built,” Matt Letourneau, managing director of communications and media at GEI, told InsideSources. “When people protest, it might look like local concerns, but behind it is a broader cross-country movement.”

He explained that the report tries to focus on projects where the Keep It In the Ground movement directly contributed to delays. In fact, such delays are an overt strategy for the movement, especially for fossil fuel projects. From their perspective, preventing natural gas from getting to market for two years or delaying the opening of a generator blocks the emissions that would have been produced by these projects.

Permitting is another area environmentalists have exploited to try and slow down energy project construction. According to the Government Accountability Office (GAO), it takes an average of 4.6 years for federal agencies to complete environmental impact statements. The lengthy project reviews are often followed by lengthy litigation, further delaying construction.

All told, construction delays supported by the Keep It In the Ground movement cost 728,000 job opportunities for American workers and $20.3 billion in lost tax revenues, which could have gone to support education, roads, and other government services. And because the report focuses on retrospective costs through lost economic benefits, the researchers believe their estimate is on the conservative end.

Before this report, various groups had estimated the cost of protest delays for specific projects. But project-specific analysis left out the coordinated nature of the Keep It In the Ground movement, which has successfully linked local concerns to a global anti-fossil fuel campaign.

While the harms are felt by local communities, few people realize they are a result of coordinated global activism, much of it supported by people and donors far from the community they impact. By publishing the report, GEI is hoping to draw attention to that campaign, in part to help resident learn what energy protests cost other states and communities “so they can assess whether they want to suffer the same fate.”

“The notion that blocking energy infrastructure results in a significant economic price tag may not be breaking news,” they explain, “but the cumulative impact of these anti-energy efforts—itself just a limited snapshot of the overall KIITG movement—is significant and alarming.”

Unfortunately, these economic costs are likely to increase this year. 350.org started the year off with a list of anti-pipeline protest camps and carbon-free emissions projects to support in the coming year.

“There is plenty of reason to be hopeful that 2019 will be the year we tip the scales back towards justice,” 350.0rg. “We need more people involved in the movement than ever before.”

How many jobs will that cost?