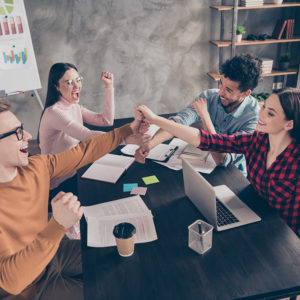 Keeping the Ties That Bind

At the time, I didn’t fully appreciate why standing with 20 people in a large open area was a special moment. We were eating donuts. It was 1987 and my first week on the job at Hewlett Packard (HP).

It was Friday — the day HPers huddled together to share updates and catch up. The donuts were on HP. I was introduced to the group and asked to say a few things about me. The mood was welcoming. This klatch happened every Friday, and if you were on time, you got your pick of donuts.

Twelve years later, my first day on a new job started very differently.  At 9 A.M. sharp, a team of 10 sales and marketing people were packed into a small room, scrunched around a table. The stress was palpable, which I attributed to being a scrappy start-up.

When the VP entered, he immediately held court. Bill (alias) alternated between loud pronouncements, asking questions and brusquely cutting people off. You could be in the middle of an answer, and he’d interrupt with, “Ok, we’re done.” Routinely.

The culture of these businesses couldn’t have been more different. At HP, managers believed that employees wanted to do great things, and a manager’s role was to clear a path. It was inclusive before inclusive became a thing.

I once emailed HP’s COO because Dave Packard was coming to visit our site on Rosh Hashanah, and I wouldn’t be able to attend. Understandably, I was disappointed. Within 24 hours, the COO responded. He shared that he had grown up in Brookline (my neighboring town), and he was profusely apologetic. He promised it would not happen again.

Fast forward to my start-up experience.

I was the only woman on a senior team, which I believed to be of little consequence and par for the course in 1999. The culture was another matter. Communication was replaced by an attitude of take the bull by the horns.  Apologies or explanations were unnecessary. Blame was rolled downhill. Need to shade the truth? No worries. I lasted one year.

Last week the topic of culture came up in a conversation I had with a seasoned businesswoman. She had been a CEO of a Fortune 500 company and was now helping small companies survive the times. She’d seen it all and lamented that culture today was “running on fumes.”

“Creating a healthy culture” is one of businesses’ 10 commandments, along with “Lead by example,” and “Make everyone feel counted.” Forbes reports that a good culture increases revenue by 4X and improves employee engagement.

It’s not hard believing that culture matters, but it is hard sustaining culture during challenging times. We know some of its key elements, which have been pointed out by a sea of literature and include:

The Homework of Commitment

Most business leaders would acknowledge the challenge of maintaining a healthy culture today. Between working from home, business pivots on a dime and increased financial pressures, culture is indeed “running on fumes.”

How can we show commitment and refuel the tank? We can include doing a “culture check” as one of the business fundamentals routinely monitored — right up there with tracking revenue, systems testing, and the like.

A good beginning for a culture check would be the standard employee survey to measure engagement. That’s not new.  It’s what gets added afterward that counts. Conduct a “culture audit” to test the building blocks.

For example, have we made “purpose” personal, giving meaning to every job? Are our teams in sync? Do we find the time to celebrate? Do we communicate beyond zoom?

A healthy culture sets the tone and equips us to perform when life is at its hardest.  It’s why donuts are about way more than donuts.  At a time when we can’t congregate at the coffee station or play in the company softball game, we need new ways to connect and identify.

Calling on all feeders of culture — do you have a story to share that will inspire us to find the ties that bind?  If you share, so will I — metaphorical donuts for all!