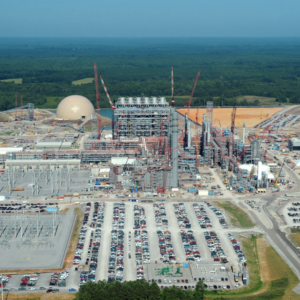 When Mississippi Power broke ground on the Kemper Project in 2010, it was supposed to mark the beginning of a new era of clean energy production. President Obama’s Climate Plan had stressed the need to develop clean coal technology and the Kemper Project was to be the first electric plant to use gasification and carbon capture technologies to burn soft lignite coal with limited emissions. No previous plant had ever used these technologies on this scale. If everything had gone according to plan, it may have altered the direction of U.S. energy exploration. Instead, massive cost overruns and a surprising surge in natural gas production is dooming the Kemper Project just weeks after it began operation.

Located in central Mississippi about 30 miles from Meridian, the Kemper County Energy Facility was designed and built to take advantage of nearby local lignite, a soft brown form of coal. Instead of burning the solid coal, however, the Kemper plant uses a high pressure gasifier to turn the coal into a pressurized gas. The gas is burned to power the plant, with the resulting emissions captured and buried underground.

In addition, the plant was designed to be “a zero liquid discharge facility,” preventing the liquid water byproducts from reaching local groundwater.

Many environmentalists were eager to see the novel technology succeed.

“Kemper is a first-of-a-kind plant that could be a game changer,” John Thompson, director at the Clean Air Task Force, an environmental group that supports the project said in 2014. “The central reality is that we can’t burn coal the way we have for the past 30 years.”

Still, that technology came at a steep price. Originally, the project was budgeted for $2.8 billion. Today, the plant is still not fully operational, and construction costs are nearly $6.9 billion. Some of that cost was borne by taxpayers.

Mississippi Power received a $270 million grant from the Department of Energy and $133 million in tax credits when the project began. Since the plant was not in operation by its original May 2014 deadline, Mississippi Power was forced to repay the $133 million. Each month of delays increases the plant’s costs by tens of millions of dollars.

“The analysis shows that primarily a reduction in projected long-term natural gas prices, and to a lesser extent an increase in operating costs of the project, negatively impact the economic viability of Kemper,” the statement said.

“Mississippi Power continues start-up activities to complete and operate the project,” it continued.

When the project was planned in 2010, an outside analysis using far lower projected construction costs estimated that ratepayers would need natural gas prices at $11 to $12 per million BTU to break even on Kemper. Currently, natural gas is selling for less than $3 per million BTU.

The economic infeasibility of Kemper is causing outrage from the very customers it was built to serve.

As early as 2012, when the Kemper Project was merely $366 million over budget, Mississippi Power announced that its customers would be facing a 13 percent rate increase to cover the cost of the project. By 2015, rate increases were up to 18 percent and the issue was sent to the Mississippi Supreme Court. The Court ruled that portions of the increases between April 2013 and July 2015 were illegal, and ordered the company to refund consumers.

The matter has not yet been settled, though.

Today, Mississippi Power is the subject of three lawsuits alleging fraud in the protracted construction and testing of the Kemper Project. Two of the cases focus on Kemper’s misleading statements about the status of construction. One suit, filed in Georgia, comes from an oil company that had contracted to purchase the carbon dioxide produced by the plant to pump into oil wells to gain access to otherwise unreachable supplies. With Kemper not yet operational, they have not received the contracted supplies of CO2. Another accuses the company of making misleading statements about delays in order to boost its stock prices.

Potentially the most damning case, however, is a class action suit against the the company on behalf of an estimated 186,000 ratepayers. The suit alleges that Mississippi Power is guilty of “fraud and mismanagement while fleecing the public in the interest of profits.”

Both cases are continuing through the court system as the Kemper Project languishes in a partially-completed state. Even with its executives pressuring Congress for tax breaks, the project appears to be a failure. Coal will remain an essential part of the energy mix in the U.S. for years to come, but the low price of natural gas has already had a significant impact on where our energy comes from.