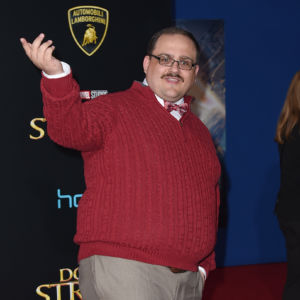 Ken Bone on How to Heal the Political Divide

Ken Bone discussed the current state of politics Friday, in an interview with InsideSources, and how he believes we can heal the political divide.

Bone became a nationally recognized figure after asking a question during the second presidential debate. His name and red sweater made him an instant internet sensation. He believes the best way to make politics less toxic is to recognize what makes us the same.

“We just need to focus more on what makes us the same instead of what makes us different,” Bone told InsideSources. “Unless we stop throwing those kinds of barbs at each other and assuming everyone who might be a Republican is the same or everyone who is a Democrat is a crazy liberal, we’ll never be able to get along.”

Bone is now using his internet stardom to help promote the political analytics and digital company Victory Holdings. The company set up a booth where people could meet him at the Conservative Political Action Conference (CPAC). Many conference attendees waited in line to meet him and take a picture.

“We need to stop that personal craziness,” Bone said. “It doesn’t begin with the government, it doesn’t begin with the president saying that message. It begins with us just getting along with each other, and when we have different political ideas, talking them out, shaking hands at the end, instead of stopping being friends just because you don’t agree.”

Bone adds that some people even attacked him for attending CPAC. He says he is politically moderate, but some people called him a neo-Nazi and bigot when he announced he would be at the conference. Bone believes those type of generalizations of different political views is a big part of the problem.

“Really I think we’re accountable for that on a personal level,” Bone said. “We can’t blame the media as if they’re some kind of villain, and we can’t blame our leadership. We can really only blame ourselves, and the only way to stop it is to stop doing it yourself and hope everyone else does too.”

Bone says that the internet adds to the problem because it allows people to post hateful comments with anonymity. Comment sections and online forums are often littered with divisive comments. Bone thinks that people should take personal responsibility, and engage in a more civil conversation.

Victory Holdings announced Tuesday that Bone would be its chief people officer. The company aims at using technology to give average people a larger voice in politics. Bone, in a sense, was the quintessential average person who had his voice amplified.