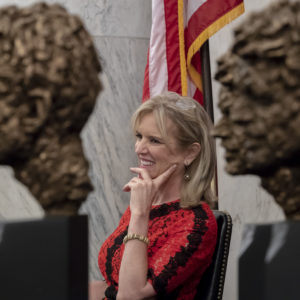 Kerry Kennedy, daughter of Senator Robert F. Kennedy who was assassinated during his 1968 presidential campaign, and president of the human rights advocacy group in his name, sits amid busts of her father to be awarded during a ceremony on Capitol Hill in Washington, Tuesday, June 5, 2018. (AP Photo/J. Scott Applewhite)
[IS] Opinions

Kerry Kennedy was three months shy of her ninth birthday when her father was shot on June 5, 1968, while on the presidential campaign trail. In remembering her father, she focused on a splintering United States. Her assessment was personal, beginning with the first word of her sentence.

“Daddy said his whole presidential campaign was about healing divisions because he saw our country was being cleaved apart again,” Kerry Kennedy told us the other night.

“Daddy” was Robert F. Kennedy. He was an idealistic, Democratic candidate whose bid for the White House was abruptly halted when Sirhan Sirhan — a Jordanian-Palestinian immigrant — assassinated him in Los Angeles 50 years ago this month.

Sirhan, in an exclusive interview with television host David Frost in 1989, said he felt betrayed by then-senator Kennedy because RFK supported Israel during the 1967 six-day Arab-Israeli war and said he killed Kennedy out of concern for the Palestinians.

She recently spent about 90 minutes discussing her literary work with Barbara A. Perry, director of presidential studies at the University of Virginia’s Miller Center, before approximately 350 eager listeners at the Newseum in Washington.

In a must-witness moment, Perry asked Kerry Kennedy what effect would RFK have on the world if he had survived to be elected president. What would have happened if he had defeated formidable Republican candidate Richard Nixon in November 1968?

Said Kerry Kennedy, “Tens of thousands of Vietnamese and Americans wouldn’t have lost their lives because he would have stopped the Vietnam War years earlier and that would have appealed to a lot of the divisions in our country that continued to fester and grow over the next four years. That’s for sure.

All of which brings us to the Trump Factor.

Kerry continued, “I don’t think we would’ve had the destructive force of somebody like Donald Trump. I mean, that’s in a nutshell, but I also think we would have had an enormous focus on areas that still haunt us to this day.”

Kennedy, who turns 59 in September, is president of Robert F. Kennedy Human Rights, a non-profit organization based in New York that advocates global equality. Her organization uses strategic litigation methods against countries and corporations in an effort to secure human rights to those afflicted. In other words, they file lawsuits to effect change.

In her book, Kerry writes, “The NBC commentator David Brinkley had called Kennedy ‘the only white politician who could talk to both races,’ and compared his assassination to Lincoln’s.”

That scenario was on full display April 4, 1968, that tumultuous night when Dr. Martin Luther King Jr. was assassinated. RFK had arrived in Indianapolis for a campaign stop, one that ended with RFK standing on a flatbed truck, speaking in an angry, predominantly black ghetto area.

Kerry’s book is unique. She weaves her own recollections of her father around insightful question-and-answer sessions with an eclectic mix of luminaries who recalled their own memories of RFK.

First up in the book is Mr. B, who serves on the board of RFK Human Rights. That’s Harry Belafonte, the first black actor to win a television Emmy Award and a human rights activist.

The chapter on Bennett is particularly poignant, mainly because he campaigned for Robert F. Kennedy in 1968, fought as a soldier in Europe during World War II, participated in Dr. Martin Luther King’s marches in the 1960s and won the RFK Ripples of Hope Award in 2014.

In one especially compelling passage in Kerry Kennedy’s book, Bennett says, “I’ve always been a pacifist, my whole life. What I’ve seen, in the war and in the South for civil rights, has only made me stronger in my beliefs about this. You know, they asked me to sing the national anthem on many occasions, but I prefer ‘America the Beautiful.’ It celebrates the natural beauty and promise of this great country.”

Kerry Kennedy during the Q-and-A part of her book asks Bennett: “So you’ve never sung “The Star-Spangled Banner”?

Tony Bennett: “I like to sing “America the Beautiful” or “God Bless America.”

KK: “You know, my father said if he became president, he’d make ‘This Land Is Your Land’ our national anthem.

That’s the Kennedy ripples of hope — from father and daughter.