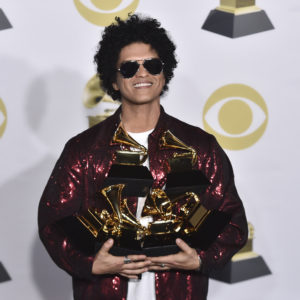 Bruno Mars poses in the press room with his awards for best R&B album, record of the year, album of the year, best engineered album, non-classical, for "24K Magic," and song of the year, best R&B performance and best R&B song, for "That's What I Like" at the 60th annual Grammy Awards at Madison Square Garden on Sunday, Jan. 28, 2018, in New York. (Photo by Charles Sykes/Invision/AP)
[IS] Opinions

The King File: Future of Work, Euro Trains, the Grammys

It used to be that when you left school or college, you sought to hook up with an employer who would offer you a whole bunch of goodies: things that were taken for granted then, like job security, health insurance and a defined pension.

You could work for, say, General Electric, AT&T or Marshall Field. And you’d be on a kind of employment plateau.

Those were the days when even well-paid union employees, like truck drivers, would reasonably count themselves as middle-class. They’d expect their children to do even better than they had.

But stagnant wages and disappearing benefits are booting millions out of the middle class. They can’t afford the genteel life anymore.

In today’s workplace, keep your resume burnished and your home in good repair, in case you need to downsize quickly. Damocles’ sword hangs over the head of every employee: It could fall in a merger, if production is moved to another state or offshore, or if your company tried for a leveraged buyout and sank under massive debt.

With just 10.7 percent of U.S. workers belonging to unions in 2017, according to the Bureau of Labor Statistics, things are not pretty for those who thought they would lead a life shielded from the buffets of the economy. Now no one is shielded — unless you are wealthy, in which case you’re likely to be one of those doing the buffeting. Or, you chose the security of government employment. That way you’re in a cocoon that private industry no longer offers.

At present, the enormity of this uncertainty in the workplace is concealed with the giddy stock market and full employment. But it’s there. When there’s a stock market correction or we have a recession (both of which history says are inevitable), the plight of working people will become more obvious. Also, the attendant plight of new retirees — more and more without pensions and relying, if they’re lucky, on 401(k) plans. They won’t have lifetime pensions, guaranteeing glitter in their golden years.

But worse may be to come. Meet the gig economy, where contract employment replaces formal employment: no employer medical plan, no paid vacation, no sick leave.

Hanging over all this gloom is the existential worry about artificial intelligence. One argument is that its predecessor, automation, always created more jobs than it cost. Mechanized woolen mills made cloth for the many. Production lines produced goods that more consumers could afford like cars and washing machines. Win-Win.

Artificial intelligence, though, threatens simply to replace workers not to make new products. Already, banks and some retailers are working to get people out of transactions, an indication of the workerless future.

While making a round-trip reservation from Brussels to London on the super-fast Eurostar, I find that it’s embraced one of the horrors of super-slow Amtrak: dynamic pricing. That’s the system where the cost of tickets is what the market will bear.

European trains, like Amtrak, have public subsidies. So the governments on both sides of the Atlantic are actually squeezing out people with limited budgets. Shame.

It seems to me if it’s the intent of government to subsidize transport, it should do so with an eye to the poor — with fixed pricing — not the rich.

This Was Not Your Grammy’s Grammys

Was I wrong in thinking the that the Grammys this year were strictly for the young? Bono and Sting looked decidedly uncomfortable.

There’s an age chasm between Bruno Mars listeners and, well, those of us who heretofore thought we were cool when we listened to Bono and Sting.

“Before you judge a man, walk a mile in his shoes. After that who cares? He’s a mile away and you’ve got his shoes!” — Billy Connolly, Scottish comedian