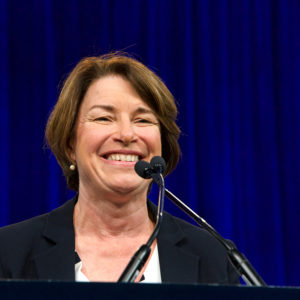 On February 4, Sen. Amy Klobuchar (D-MN) released her much-anticipated antitrust bill that, if enacted, would become the most significant change in antitrust law since the adoption of the consumer welfare standard in the 1970s. Klobuchar’s Competition and Antitrust Law Enforcement Reform Act (CALERA) does not explicitly mention big tech, political analysts agree the bill is part of Washington’s sweeping attacks on the industry.

While some of the bill’s recommendations might be beneficial, notably the call for enhanced appropriations for antitrust enforcers at the Department of Justice and the Federal Trade Commission, the bill has two significant flaws that could inflict substantial damage to the tech sector. First, CALERA shows a misunderstanding of the current state of the big tech industry; and second, the bill fails to consider the numerous consumer benefits large tech companies have brought to U.S. consumers. Failing to place consumers at the heart of antitrust reform means any proposals can have significant long-term repercussions for the group antitrust law claims to be protecting.

Most significantly, Klobuchar’s bill would alter the statute that determines an acceptable or unacceptable merger or acquisition. Currently, the Clayton Act only prohibits mergers and acquisitions if they “substantially…lessen competition, or to tend to create a monopoly.” Klobuchar’s bill would rewrite the Clayton Act to prohibit mergers or acquisitions if they “create an appreciable risk of materially lessening competition.”

One critique Klobuchar’s bill offers against large companies, and by extension big tech companies, is that they “harm workers by paying them low wages.” This allegation ignores the government’s statistics showing tech workers, including those at large tech companies, earn an average of $88,240, well above the median annual wage of $39,810. Recent studies have also shown the tech industry sees an annual wage growth of around 3.2 percent, above the 3 percent national average. The fact the tech industry pays well above the median yearly wage and has seen wage growth above the national average suggests the sector is not harming workers but providing them with economic opportunity.

Another misguided conclusion in Klobuchar’s bill is that large firms charge “higher prices” and produce “lower quality” products and services for consumers. In the tech sector, these concerns have not materialized. Over the past decade, big tech companies have taken overt steps to lower prices and raise quality for consumers. When Facebook acquired WhatsApp in 2014, it took an app that previously charged consumers an annual fee and made it free. In doing so, Facebook grew WhatsApp users from 200 million worldwide in 2013 to over 2 billion in 2020.

Similarly, Apple has been able to use its market power to lower prices and increase quality for consumers. When Apple released the first generation of iPhone in 2007, it cost up to $599. Now in its 12th generation, the average selling price has remained flat, between $600 and $700. This price stagnation had occurred despite the features of the 12th generation being unimaginable when the first iPhone was released.

The example set by Facebook and Apple shows that when big tech companies can utilize economies of scale, they can benefit consumers with high quality and lower costs. These examples would also suggest altering the tech industry’s dynamics could result in higher consumer prices, limiting their economies of scale and their ability to access cutting-edge products at affordable prices.

Klobuchar’s bill also ignores the significant contribution big tech companies have made to small businesses. Between 2019 and 2020, small and medium-sized businesses sold over $3.4 billion worth of products and averaged $160,000 in sales. Small businesses have only generated these impressive sales because Amazon provides them with access to the 126 million consumers who have Amazon Prime accounts. Additionally, stores that use Amazon have created an estimated 1.1 million jobs.

While legislators will undoubtedly continue their attacks on big tech into the foreseeable future, it is clear that Klobuchar’s bill is underpinned by a flawed understanding of the tech industry’s current state, the consumer benefits that tech companies generate, and the support they have provided to small businesses. These factors alone should be enough to convince lawmakers that Klobuchar’s Competition and Antitrust Law Enforcement Reform Act should not become the basis of U.S. antitrust law.