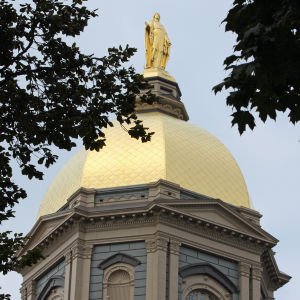 The University of Notre Dame

Should the federal government be collecting more data on college students if it helps determine which schools best equip graduates for the workforce?

That’s one of the questions raised by a bipartisan bill introduced in both houses of Congress this month, as well as a new report released Thursday by a prominent Washington, D.C., think tank.

Under the “Student Right to Know Before You Go Act,” colleges would be required to provide “more accurate and complete data on student retention, graduation, and earnings outcomes.”

The legislation would overturn the ban on a federal “student unit record” system, which would “track students through higher education and into the workforce,” according to Inside Higher Ed. The basic idea here is that prospective students can make better college decisions if they know, among other things, how much they may be making after graduation and what kind of student loan debt they could incur.

The bill earned praise from the New America Foundation, the same think tank that released a new report Thursday delving into how students choose which school to attend for higher education.

According to Fishman, “Allowing the federal government to retain information on all students in higher education could paint more complete pictures of college completion, post-graduation outcomes, and other information.”

These issues certainly appear to be of critical importance to students.

Fishman’s survey finds that “financial concerns about the payoff of college and college affordability take center stage” when students make higher education decisions. Whereas many researchers previously concluded that location is a major factor in school selection, New America sees a different trend: “For all but the wealthiest students, a school’s cost, programs of study, and availability of financial aid rank more important than its location.”

Sponsors for the “Student Right to Know Before You Go Act” in the House include Republicans such as Rep. Mia Love of Utah and Rep. Paul Ryan of Wisconsin as well as well as a pair of Democratic lawmakers. The Senate version of the bill comes from Sen. Ron Wyden, D-Ore., Sen. Marco Rubio, R-Fla., and Sen. Mark Warner, D-Va.