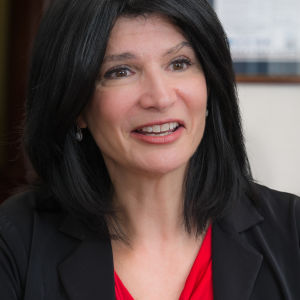 As president of the country’s largest labor union, the National Education Association, she was overjoyed by this month’s passage of the Every Student Succeeds Act — legislation President Barack Obama signed to end President George W. Bush’s much-maligned school reform policy, No Child Left Behind.

The new law shifts significant controls over public education to the states, reducing requirements for the use of standardized testing in evaluating students, teachers and schools. It’s music to the ears of Eskelsen García, who has long argued against what she calls the “test and punish” model of assessment.

The union chief was still euphoric about ESSA when she appeared on C-SPAN’s “Newsmakers” program Sunday. She said she was in “happy shock that things are going to be really, really, really better for 52 million public school children.”

Here’s what’s certainly true: things are about to be better for the NEA, especially if its Democratic primary candidate — former Secretary of State Hillary Clinton — wins the White House next year.

For all teachers unions have done to support Obama, Clinton has always been closer to them than the president, whose education policies created a rocky relationship with what’s traditionally a core progressive constituency. As Politico put it in “Obama vs. teachers unions: It’s still on,” education is the issue where the president has “veered farthest from his liberal base,” except perhaps for trade:

It’s historically a local issue, but Obama and [Education Secretary Arne Duncan], his pickup basketball pal from Chicago, have reshaped the national landscape, using carrots (like the Race to the Top competition for stimulus dollars) and sticks (like the threat of sanctions under the No Child Left Behind Law) to nudge states into adopting reforms that unions hate.

By choosing [Deputy Education Secretary John] King to succeed Duncan, the president is signaling that he cares more about continuing those fights—for higher standards, for charter schools, for standardized testing—than healing wounds or papering over differences within his party before the 2016 election.

King is set to take over after Duncan gives a farewell address in the Windy City Wednesday, but a new secretary could be on the job along with a new president in January 2017. And if it’s Clinton’s in the White House, significant changes to education policy may be in store. Vox flagged a November American Federation of Teachers forum where the Democratic front-runner voiced opposition to evaluating educators on test scores and skepticism about expanding charter schools, contrasting herself with Obama.

She has also spoken out against Republican presidential candidates who use anti-teacher-union rhetoric, including New Jersey Gov. Chris Christie. He said the AFT deserves a “punch in the face” for putting its members ahead of school reform.

“I think we should support teachers, not make them the scapegoats for America’s problems,” Clinton said in recorded remarks to the NEA’s Representative Assembly in June. “We should defend against attacks on collective bargaining. We should listen to educators about what’s working and what’s not.”

Notwithstanding the decline of the labor movement, teachers unions remain massive players in American politics, primarily supporting Democrats. They made roughly $19.2 million in political contributions during the 2012 elections, according to OpenSecrets.org.

On C-SPAN, Eskelsen García was quick to tout this activism, framing it as nothing more than good citizenship.