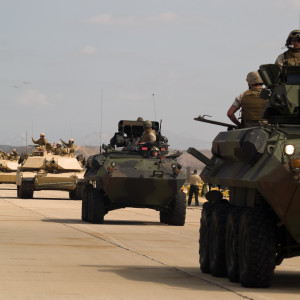 When the Koch brothers gave their first joint television interview Tuesday to MSNBC’s “Morning Joe,” most of the conversation focused on the billionaire industrialists’ domestic priorities: The Hill reported, “They want to slash taxes, lighten prison sentences for nonviolent drug offenders, cut government spending and ‘corporate welfare,’ and allow businesses — including their own carbon intensive petroleum and chemical companies — to operate with limited regulations.”

But Charles Koch, the older of the two brothers who have become boogeymen to liberals for their support of conservative causes, also weighed in on foreign policy — and he didn’t sound like a traditional Republican. “To me, foreign policy is a form of insanity,” he said. “We keep kicking out dictators and then we don’t get anything better, and we mess up a lot of people’s lives in the process — spend fortunes and have Americans killed and maimed. What do we have to show for it?”

This was a reminder of something significant: in their libertarianism, the Kochs favor far less military interventionism than many Republican elites. In fact, they may be less interventionist than some establishment Democrats in Washington, as the Daily Caller argued last year under the headline “The Koch Brothers Are More Anti-War Than The Center For American Progress.”

What’s even more noteworthy is that the Kochs are working actively to change debate around these issues, just as they’re seeking to rehabilitate their public image ahead of 2016. The Charles Koch Institute was one of three sponsors for Wednesday’s “Summit on Realism & Restraint: A New Way Forward for American Foreign Policy” at George Washington University, and the Institute’s vice president of research and policy, William Ruger, was among the speakers.

During his panel discussion, Ruger pushed back against former Bush official Kori Schake, who argued the Iraq War was the Bush administration’s understandable response to Americans’ post 9/11 fear. “Iraq was a case where they took advantage of American fear,” he said. “I don’t believe they were motivated by it.”

Ruger has argued against hawkish, neoconservative foreign policy for years. In 2014, he appeared on a panel moderated by Weekly Standard editor William Kristol and advocated for focusing on sound police work, special operations forces and intelligence instead of military intervention. Ruger said America faces real threats across the globe, but “the world is a lot safer than we oftentimes see it, particularly in our public discourse.”

Ruger fleshed out his case for “libertarian realism” in Reason, writing the American diplomacy “ought be focused on articulating — but not aggressively imposing — liberal values and the benefits of free markets”:

Realism teaches that power matters significantly in the world, and states can use force to meet a variety of goals, some of them malignant. But even great powers face constraints. As we saw in the Iraq War and aftermath, the world — including the comparatively powerless — also gets a vote, placing limits on what the U.S. can impose. Indeed, the application of power often brings negative unintended consequences and even outright failure.

The Koch brothers have yet to support a particular Republican candidate for president in 2016, and it remains to be seen how much candidates’ foreign policy views will matter as they decide who to back in the primary. The Kochs could have trouble finding someone who’s quite where they are on these issue, seeing as most of the leading contenders have staked out fairly hawkish positions.

The candidate who best represents Ruger’s vision of libertarian realism, Kentucky Sen. Rand Paul, is far behind in the polls.