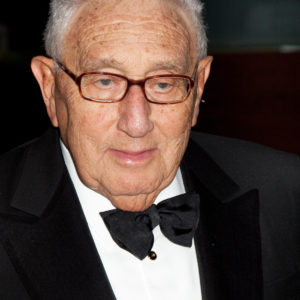 On Korea, These Two Dotards Are Out of Their League

Two old men, whom the North Koreans might properly call “dotards,” are insinuating their diplomatic knowledge and skills into the Korean crisis. First there is 91-year-old Jimmy Carter, who yearns to go yet again to North Korea and see if he can talk over a peace agreement with Kim Jong-un. And then there’s Henry Kissinger, who, at 93, thinks he’s capable of offering constructive advice to President Donald Trump.

It was the North Koreans who had everyone reaching for the dictionary after a commentary from Pyongyang described Trump as a “dotard” for threatening in the United Nations to “totally destroy” North Korea. My dictionary defines dotard as a “senile person,” a term that would probably apply more accurately to Carter and Kissinger than to Trump. Both of these gentlemen seem to be in control of their basic senses but risk recommending policies that pose a serious danger to attempts at compelling North Korea finally to listen to reason and come to terms on its nuclear program.

It would be difficult to say which one is more useless, Carter or Kissinger. Carter wants to go to North Korea and negotiate a weak “freeze-for-freeze” agreement, maybe even a peace treaty, in which North Korea would promise to stop testing nukes and missiles while the Americans and South Koreans stopped their annual war games. He evidently thinks a little happy talk in Pyongyang would warm over Kim Jong-un just as he claims to have charmed Kim’s grandfather, Kim Il-sung, into stopping his nuclear program when they talked in a boat on the Daedong River in Pyongyang several weeks before the Great Leader died in July 1994.

Carter, however, does not have Trump’s ear as does Kissinger, who has met him a number of times since his election in November of last year. Kissinger, who has always claimed to be a staunch anticommunist, reached the pinnacle of his career as national security adviser and then secretary of state for President Richard Nixon during the Vietnam War. He is best remembered for having engineered the opening of U.S. relations with China and then for negotiating the Paris peace agreement in January 1973 with North Vietnam, for which he received the Nobel Peace Prize.

Like Carter, who was president when the U.S. formally opened ties with China in 1979, Kissinger is totally pro-China. He has advised Trump not to be critical of China, which he sees as the main player in bringing North Korea to terms on its nukes and missiles. China loves the idea of freeze-for-freeze, which would weaken the U.S. alliance with South Korea by stifling not only military exercises but overall cooperation between the armed forces of both countries.

Kissinger, in his last meeting with Trump, recommended that Trump go along with freeze-for-freeze even though the deal would only require North Korea not to test-fire more missiles or detonate another nuclear warhead. There would be no stopping the North Koreans from producing more missiles even if they suspended missile tests. Certainly, North Korea would not cease research and development of the means for attaching warheads to the tips of long-range missiles capable of reaching the continental United States. Obviously, there would be no “verification” of anything.

One should remember that Kissinger has been thoroughly misled on deals with enemies of the United States. The Paris peace agreement of 1973 was a formula for failure under which the United States withdrew its last troops from South Vietnam, ceased bombing and basically exposed the South to invasion by the North Vietnamese. They easily overran the South in the first few months of 1975 after the U.S. Congress refused to authorize more weapons shipments to South Vietnamese forces. Gerald Ford, who had risen from vice resident to president after Nixon resigned in the Watergate scandal, would not authorize air strikes.

Kissinger would claim forever that North Vietnam had gone back on the Paris peace. He thought of returning his Nobel, which Le Duc Tho, the North Vietnamese negotiator, had already rejected when the Nobel committee in Oslo had the crazy idea of making them co-winners. Kissinger had no experience in Vietnam, did not understand the dynamics of the North Vietnamese drive to take over the South, had no concept of the suffering the South Vietnamese would endure and did not appreciate the hardships and sacrifices of South Vietnamese troops and their American ally and benefactor. The Paris peace was merely an elaborate cover for American withdrawal from an unpopular war.

Nor does Kissinger have much experience in Korea. Since he believes he understands just about everything, he undoubtedly is convinced he has a firm grasp on the realities of dealing with North Korea. If his conversation with Trump is any guide, however, he seems unaware of North Korea’s unremitting ambition not just to reach a phony “peace treaty” with the United States but to use any agreement as a stepping stone to reunification on North Korean terms.

Kissinger’s Washington firm, Kissinger Associates, has done multi-million-dollar business with China. He is, in effect, in China’s pocket. It is disturbing, considering that relationship, to think that Trump should listen to his advice. Rather, Trump should go on counting on those in his immediate entourage, including Defense Secretary Jim Mattis, Secretary of State Rex Tillerson, and National Security Adviser H.R. McMaster.

All want to avoid a second Korean war. None wants to yield to Chinese and North Korean pressure for a deal that would only risk disaster for South Korea.