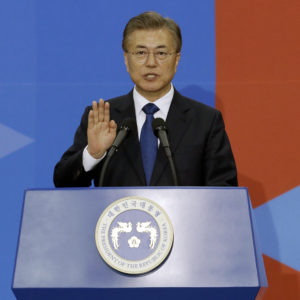 The good news about South Korean President Moon Jae-in’s summitry with President Donald Trump this week is they’re talking as partners in the drive to end North Korea’s nuclear program and bring about inter-Korean reconciliation.

A major barrier to cooperation, however, is loose talk about a peace treaty or peace agreement that would formally “end” the Korean War more than six decades after the truce was signed at Panmunjom. Sure, why not sign a treaty, say the deal’s advocates, after which all sides will live happily and peacefully, no more “incidents.”

Actually, however, any such deal would please no one.

The most severe flaw in all talk of a treaty is the North Korean refusal to accept South Korea as an equal partner or even a signatory. The logic here is that the South’s Korean War president, Rhee Syngman, wanted no part of the armistice negotiated at Panmunjom — something North Koreans always point out while dismissing the South.

Rhee believed — correctly — that the armistice would legitimize the quasi-permanent division of the Korean peninsula, and he did not want one of his generals at the table with American, Chinese and North Korean generals as they hassled over a deal that no one would like. (Gen. Paik Sun-yup, who had risen to four-star general in the war, describes the talks from his perspective as an observer in his memoir, “From Pusan to Panmunjom.”)

Americans often talk of standing shoulder to shoulder with their South Korean ally, but shockingly demands for a U.S.-North Korea “treaty” — forget about South Korea — are on the rise. It’s become fashionable to say the United States and North Korea are “technically” at war, though China never gets mentioned. Treaty advocates prefer not to mention that Chinese troops rescued the North from annihilation and suffered far greater losses than did the North Koreans.

The fact that Moon is seeing Trump gives both of them a chance to confirm, if we’re going to negotiate anything, it’s going to be as equal parties. In the same breath, Trump should endorse and applaud Moon’s desire for renewed dialogue with North Korea — affirmation of the South’s right to pursue an independent course as a sovereign nation that both the United States and North Korea need to respect.

Though the North Koreans no doubt would love to see Moon acting separately from Washington, they would like nothing better than a treaty with the United States that would undermine the U.S.-South Korean alliance and reduce the South to insignificance. The prospect of the United States and North Korea, and China, negotiating such a treaty evokes memories of the long history of wheeling and dealing in which Korean leaders have been bypassed, ignored, and, if possible, forgotten.

We all know about the agreement between the United States and the Soviet Union for dividing the Korean peninsula at the 38th parallel in 1945, but many have forgotten the Taft-Katsura talks 40 years earlier. William Howard Taft, then the secretary of war, later U.S. president, and Japan’s Prime Minister Katsura Taro never formally signed anything but did agree in 1905, as recounted in a memorandum of the conversation, that Japan would exercise authority over Korea while the United States held sway over the Philippines.

The circumstances today may seem quite different. Presumably the Americans would wring the promise of a “freeze” on North Korean nuclear and missile tests — though they would have no way to stop the North Koreans from making nukes and missiles even if they foreswore testing. China would get into the act as North Korea’s Korean War ally, in theory the only nation capable of exercising a restraining influence on the North’s ambitions.

Advocates of a peace treaty don’t seem to have considered the implications. The big powers as always would be deciding on the future of the Korean peninsula. South Korea is too big and strong to accept the humiliation of a U.S.-North Korea-China treaty. It is hoped Moon is making that clear to Trump.