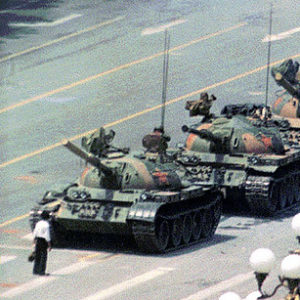 The vision of a brave new world in China three decades ago was captivating, exhilarating proof at last that democracy could prevail in an outpouring of revulsion over communist dictatorship.

Alas, it was not to be. The hypnotic image of reform, of the forces of right defeating evil, yielded soon enough to a harsh reminder that might makes right. Mao Zedong was correct when he came out with his most memorable quote, “Power grows out of the barrel of a gun.”

I was in Beijing when tens of thousands, not just crazy kids but also somber older people, filled Tiananmen Square. Rampaging through streets leading to the square, they promised to overthrow the rulers across the avenue, headquartered in Zhongnanhai beside the Forbidden City, where leaders of the Communist Party and government plotted to crush the infidels.

Mao had long since died, and a reform-minded Deng Xiaoping was now “paramount leader,” reluctant to take on such titles as president or “party chairman” or even secretary-general but very much in control.

Some believed that Premier Li Peng, Deng’s longtime ally, was the tough guy who had the troops end the protest as tanks rolled onto the square on June 4, 1989, but actually Deng — modest, unassuming, pragmatic — probably had more to do than anyone else with ordering them to open fire. So doing, Deng set a precedent that endures today under President Xi Jinping, who has vastly increased his power since taking over six years ago.

Deng lives on in history as the person who reversed the fanatic, and often destructive, pattern of total state and party control over just about everything, notably enterprises that were struggling and failing in a Third World-type economy. As Deng gathered strength, budding tycoons sprung up like flowers in spring, eager to demonstrate how well they could do when unimpeded by noisy adherents to Mao’s hardline communist principles.

Surely in this setting China was ready for democratic revolution nearly 40 years after Mao’s Red Army had completed its takeover of the country on October 1, 1949. Wrong. The Tiananmen crackdown foreshadowed today’s system in which private and state-controlled entities reign supreme while the state under the party suppresses signs of dissidence and dissent, including mention of the revolt on Tiananmen Square and its bloody aftermath.

Watching the uprising on the square, I was constantly reminded of the protest that I had witnessed nine years earlier in Gwangju. On a smaller scale, protesters had taken over the city in an outpouring that looked like a smaller version of what I was seeing in Beijing. The suppression of the Tiananmen revolt, by soldiers firing into the crowd, bore a terrible resemblance to the bloody denouement at Gwangju.

There was, however, an enormous difference between the two. Quite aside from their comparative size and scope, they had just about the opposite effect on the societies and systems that their leaders hoped to transform.

While China under Xi Jinping does everything possible to expunge the memory of Tiananmen, Korea venerates Gwangju as a turning point in the struggle for democracy. Chun Doo-hwan, the general who seized power after the assassination of Park Chung-hee in October 1979, ruled for seven more years. Finally, in June 1987, he had to yield to mass protests that ushered in a democracy constitution calling for direct elections of a president and National Assembly.

Koreans flock to the elaborate memorial at Gwangju venerating the revolt and the graves of those who died there, but the victims at Tiananmen are memorialized only in small services and ceremonies conducted sub rosa or in observances outside the Chinese mainland. No statue or painting is to be seen inside China as a reminder of the suffering on Tiananmen Square.

The implications for Korea are obvious. The Chinese under Xi Jinping support North Korea’s leader Kim Jong-un as a friend and ally even if they’re more than a little wary of the nuclear program that he refuses to give up. South Korea’s President Moon Jae-in, eager for reconciliation with the North, honors the victims of Gwangju but overlooks the horrors of Kim’s dictatorship.

Inside North Korea, both the Tiananmen and Gwangju uprisings go unmentioned. North Korea’s rulers might love to see signs of revolt in the South, but they definitely don’t want their own people to get any revolutionary ideas. Naturally, like the Chinese, they must be sure Tiananmen remains a deep and dark secret while counting on Beijing for enough oil and food to keep the Kim regime on life support.