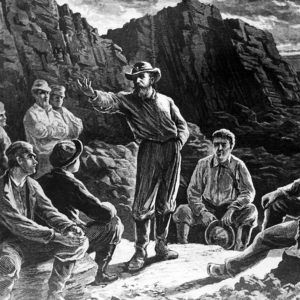 An illustration of a Molly Maguires meeting in 1874. (AP Photo)
News

The Secret History of Underground Unions

Labor Day is a time to reflect on the important role workers and unions have played in our history and culture. A history full of secret rituals and underground worker movements.

The very first Labor Day celebration was held in New York City on Sept. 5, 1882. Labor unions and workers held a parade which was followed by a massive picnic. The celebration marked a turning point in how laws and society treated the working class.

The American worker in the nineteenth century faced many challenges. Labor unions were formed to help address workplace issues through collective action. But unions were often the target of corrupt employers and government officials who were known to retaliate against workers that tried to join them.

The U.S. Congress eventually intervened by guaranteeing all people the right to organize through provisions in the Clayton Act of 1914. The National Labor Relations Act of 1935 further solidified the right by guaranteeing employees could organize without detriment through unfair labor practices.

Labor unions gained many legal protections that have helped them become political powerhouses in the century since. But before lawmakers stepped in, unions and their members were subjected to many dangers. Even belonging to a union could get a worker blacklisted from their industry.

“They [didn’t] feel safe expressing their ideas and their allegiances in public,” Macalester College Prof. Peter Rachleff told InsideSources. “They were afraid of losing the ability to support themselves and their family. They could be blacklisted. The blacklist was a very well known phenomenon in that period of time.”

Some workers began forming underground labor associations to protect themselves. Those secret labor groups ranged from having advanced rituals and a complex network of members to more basic associations of workers who feared retaliation. They all shared the common goals confronting the economic and social challenges of their members.

“They addressed all the issues that people forming them were confronting in their lives,” Rachleff said. “They were people on the bottom of the economic and political ladder. Either as people of color or immigrants.”

Labor unions and the workers that support them have had a huge impact on America. The labor movement has redefined political and cultural norms throughout its history. Sometimes they have had to go underground in that fight. Here are some of the most notable secret labor groups that we now know about.

The Knights of Labor

The Knights of Labor began as a secret fraternal order in 1869. Uriah Smith Stephens and a small group of Philadelphia tailors founded the group to address workplace and community challenges. The order was able to grow quickly, and it soon developed a vast and secret network which included thousands of workers.

“They elaborated this into a set of practices, a larger creed,” said Rachleff, who teaches labor, immigration, and black history. “They had passwords, body signals, wrote in chalk and code on sidewalks.”

The Knights of Labor remained secret to protect its members from retaliation. The secret ritual also helped to strengthen the bonds between members. Grand Master Terence Powderly would eventually start to make the union more public when he was elected to lead it in 1879.

The Knights of Labor also adopted a policy to welcome workers regardless of their skills, race, or gender. The policy helped them grow rapidly to nearly 20 percent of the entire national workforce by 1886. Rachleff notes that the order even managed to get a private meeting with the pope to address a ban on joining secret societies.

“The Knights of Labor sent a delegation to the Vatican,” Rachleff said. “They went and they negotiated with the pope about whether there were changes that they can make in their ritual without completely giving it up.”

Pope Leo XIII met with a delegation representing the union in the 1880s. They came to a mutual understanding and the pope exempted the order from the ban. American Catholics were allowed to join without being at odds with the church. The decision was critical as many members were Catholic.

The Order of United American Mechanics was organized to protect native workers against immigrant labor. Philadelphia workers formed the group with many feeling resentment forwards foreign workers. The Panic of 1837 caused a severe economic downturn which domestic workers struggled to overcome.

A group of workers held several conferences to address their concerns starting in 1844. The conferences resulted in the decision to form a secret society of workingmen. Those members would be required to undertake actions against foreign labor. They were also only allowed to support businesses that hired American born workers.

Irish immigrants faced immense economic and cultural difficulties in the nineteenth century. They overcame those challenges by forming close communities and entering into civil service. The Molly Maguires was formed as a secret society of Irish coal miners to address their own challenges in the 1800s.

“In Pennsylvanian, there was an Irish immigrant miners organization called the Molly Maguires,” Rachleff said. “They too didn’t draw a sharp boundary between political issues and workplace issues. I think that’s typical of these kinds of underground organizations in the nineteenth century.”

The Molly Maguires was formed as an extension of a secret workers association in Ireland. The group worked together to improve their lives in a country that was hostile to Irish immigrants. They were violent in nature which necessitated the need to remain underground.

The Philadelphia and Reading Railroad would eventually take action to end the group in the 1870s. James McParland, a private detective with the Pinkerton Agency, was hired to infiltrate the group which led to its downfall. His testimony during later court cases highlights numerous violent crimes conducted by group members.

Sir Arthur Conan Doyle based his Sherlock Holmes novel The Valley of Fear on these events. Another Pinkerton agent would show up later on in his detective series. The Molly Maguires film, starring Richard Harris, Sean Connery, and Anthony Zerbe, was loosely based on the events, as well.

Southern black workers face significant racial and economic hardship in the decades following the Civil War. They began to form loosely organized associations to help each other overcome those challenges. Many of the groups were formed among black workers in address workplace issues.

“Individuals and families belonged to many organizations, and a good part of their lives involved going to meetings,” Rachleff, who has written about southern black labor movements, said. “I think that was particularly widespread among the African American South in the last 35 years of the nineteenth century.”

Southern blacks kept many of these groups a secret because of racial tensions. The Combination No. 20 was formed in secret among black warehouse workers in Richmond, Virginia. They worked together to address the issues they were facing economically and at work.

The Sons of Vulcan was formed in the nineteenth century by a group of puddlers in Pittsburgh, Pennsylvania. The puddlers were skilled craftsmen who helped in the creation of steel. They met to address labor tensions they had with the steel industry, and the economic hardships puddlers faced from the Panic of 1857.

The union was a publicly known union at the time, but its inner workings were not. Its operations and membership rolls were kept from the public eye and closely guarded. Union leadership decided to keep that information a secret because of the threat of labor spies and physical retaliation.

The Order of the Sovereigns of Industry was formed to address social issues urban workers were facing in 1874. The group was a mutualist and thus supported the establishment of consumer cooperatives. The group adopted a set of secret rituals and practices inspired by the Order of the Patrons of Husbandry.

The Order of the Patrons of Husbandry was different in nature as it was a cooperative of farmers. It essentially functioned more like an industry group than a labor organization. The order was organized as a secret society as a means of protecting its members against retaliation.

William H. Earle was tasked with forming a sister organization in Massachusetts which was a more industrial state. He decided to go a different route and started to organize people that had interest in forming a new workers mutual aid organization in secret. The Order of the Sovereigns was formed as a result.

Chinese immigrants also faced many hardships when they settled on the West Coast in the nineteenth century. They responded by forming loose affiliations known as tongs. The tongs were typically organized as secret societies. They addressed a range of issues, including work, much like the groups that formed among southern blacks.

Domestic workers and established unions were particularly hostile. The Chinese immigrants were willing to work a lot cheaper than native born workers and thus posed a threat. The tongs would eventually take on a more violent persona as they became more engaged in criminal activities. Some began to evolve into gangs.