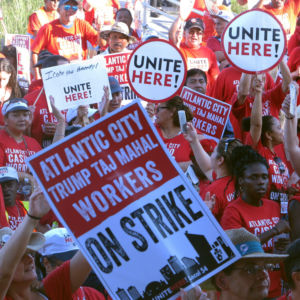 Labor unions have utilized protests throughout their existence and now many of those fights have become forever engraved in history.

The very first Labor Day was held in New York City on Sept. 5, 1882. The day consisted of unions marching in a parade which was followed by a massive picnic. The event in its own right became an important union demonstration because it honored workers and gave rise to the idea of a day celebrating them.

Several states began moving to institute their own Labor Day after the march. About a decade later a bill was approved in 1894 making the first Monday of September a nationally recognized holiday. Labor Day celebrates American workers, as well as the unions that represent them.

Labor Day is also a good time to look back at all the fights workers and unions have had over the generations. Here are some of the most iconic and interesting worker protests in American history.

The Battle of Blair Mountain

Blair Mountain in West Virginia in 1921 was once the site of a deadly fight involving coal miners. The incident would be known as the largest armed uprising since the Civil War. It started when coal miners began protesting to demand better treatment.

Roughly 10,000 miners clashed with 3,000 coal company supporters and police deputies. The week to follow was marked with firefights and even bombings by biplanes. Federal troops eventually intervened but by that point dozens of people had been killed.

Chicago was once the site of a violent union demonstration against police in 1886. Haymarket Square erupted into a day of violence when a union demonstrators threw a bomb at police.  At least eight people died when the riot was finally settled later that day.

“It turned into a riot because there was a bomb thrown and there were police killed and then workers were killed,” University of California, Santa Barbara Professor Nelson Lichtenstein told InsideSources. “It turned into a huge event. There were trials, people were hung and it created the moment for the, there’s a labor crisis in this country.”

The Triangle Shirtwaist Company fire in 1911 has become one of the most well known workplace disasters in history. Over a hundred workers died when the factory was engulfed in flames. The incident also led to a series of protests that gave worker advocates and unions enough leverage to pass many of the workplace safety regulations enjoyed today.

Republicans are not typically viewed as allies of the labor movement. Nevertheless, one of the most revered Republican presidents was at one point a union leader. President Ronald Reagan helped end a violent protest in 1945 between studio crews and Warner Brothers.

The strike put a hold on many Hollywood productions at the time. The strike grew rapidly before eventually erupting into a riot outside the studio gates. Reagan helped broker a deal that would end the violent protests. His leadership caught the attention the Screen Actors Guild‐American Federation of Television and Radio Artists.

Reagan was elected to serve as president of the guild in 1947. It was one of his first political positions and even one of the first leadership roles he held. The guild still honors him as one of their best presidents.

The General Motors sit-down strikes in Flint, Michigan, helped create the modern labor movement. Workers at the automotive plant decided to strike for several weeks in 1936. The strike was critical in proving a new series of workplace regulations.

“I think the most important strike of the twentieth century is the General Motors sit down strike in 1937,” Lichtenstein noted. “It set off this enormous wave of sit down strikes. Not that big in American history but the most consequential and that created the modern labor movement.”

The strike was the first real test of a new federal law known as The Wagner Act. The act was passed in the previous year to give workers and unions more rights when challenging their employer. Many companies were ignoring the law but the General Motors strike proved workers could use it to protect themselves.

“Because it was a sit down strike it worked kind of differently from a strike where the workers go out,” Sarah Lawrence College Prof. Priscilla Murolo told InsideSources. “In this case the workers occupied the plant and their families and neighbors brought them food and formed a chain around the plant so the police could not get in to remove the strikers.”

The United Auto Workers helped organize the strike. One night the plant crew simply stopped working. They ignored legal notices that they were trespassing and simply continued to sit in the plant without working.

Martin Luther King Jr. has earned his place as one of the most important civil rights leaders ever. He was also a huge advocate for the labor movement. King had the chance to advocate for both when he turned out to march with sanitation workers in Memphis, Tennessee.

“He was in Memphis because the sanitation workers in the city were unionizing,” Murolo explained. “The equipment was terrible and sanitation work was done only by black men and the city didn’t value black men’s well being very much.”

While Reagan was once a union leader, he wasn’t afraid to fight back against the labor movement. His biggest conflict with unions came in 1981 when he used his authority as president to end a national strike by air traffic controllers belonging to the Professional Air Traffic Controllers Organization.

“Ronald Reagan issued an edict and said anyone of the strikers that don’t return to work in two days is going to be forever fired and banned from public employment,” Murolo said. “He did fire thousands and thousands of these strikers.”

Reagan declared the 13,000 worker strike was a threat to national security and thus illegal. Nevertheless, only about 1,300 controllers decided to return after the warning. The government was forced to find personnel that could replace the thousands of fired controllers.

“They brought in some controllers from the military and they quickly trained a bunch of new controllers,” Murolo also noted. “They brought in all these replacement workers and fired all of these strikers and a few years later those new workers unionized.”

Minneapolis, Minn. was once the site of a violent worker rebellion that lasted the entire summer of 1934. Tensions between truck drivers and the trucking companies in the city eventually broke out into fighting and brutality. Truckers and police clashed on the streets, wounding 67 and leaving two dead.

The Trotskyist Communist League of America helped lead the fight. The strike and violence helped set the stage for the Teamsters becoming the powerful political force it is today. The local Teamsters chapter remained under socialist leadership until 1941.

“The first major instance of violence was on May 19 when police attacked a group of strikers who were attempting to stop scabs unloading a truck in the city’s market area,” the Teamsters detailed. “About 35,000 building workers had walked out in protest of the police violence and many more struck for union recognition.”

The Teamsters eventually broke from their socialist roots when leaders of the union and the Socialist Workers Party were sentenced to federal prison. The sentencing marked the first convictions under the anti-radical Smith Act, which would eventually be found unconstitutional.

Cesar Chavez is known as one of the greatest union leaders in history. He helped lead a series of agricultural strikes in 1965 that changed laws and even how many unions operate. It also led two unions involved in the protest to merge into the United Farm Workers of America.

“That strike actually began not with Cesar Chavez’s group but with a group of Filipino men who were in what they called the Agriculture Workers Organizing Committee,” Murolo noted. “They went on strike, and then the National Farm Workers Association, led by Cesar Chavez, joined the strike and together they formed the United Farm Workers.”

The Knights of Labor fought back against segregation in 1886 when they held their national convention in Richmond, Virginia. Union Representative Frank J. Ferrell was barred from entering the hotel booked for him because he was a black man and the city was segregated.

“In 1886 the Knights of Labor had their convention in Richmond, Virginia, and really challenged segregation,” Murolo stated. “They put Frank Ferrel on the stage, right after the governor, to introduce the national leaders of the knights, Terence Powderly. Then they held at integrated march.”

The Knights of Labor began as a secret society to prevent employers from firing members. Its membership grew quickly in the years to follow. By 1886, it had 700,000 members resulting in the union changing its rules about being secret.

A Day Without Immigrants

The Great American Boycott was a one-day strike held in 2006 by Latino and Hispanic workers. Protesters demanded amnesty and programs to help legalize illegal immigrants. They’re hope was to show how important immigrants were to the economy by not working for a day.

“It was in fact a work stoppage by basically unorganized people, not only Latinos but many others,” Lichtenstein stated. “A million workers, maybe even more, stopped working that day. It’s very relevant in the current moment because it was a protest against restrictive immigration law.”

Labor unions joined the protests as a show of solidarity to the immigrant workers. Many of the same political disputes over immigration are playing out ten years later in the current presidential election.