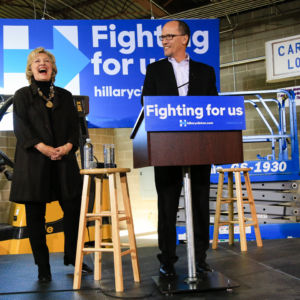 Labor Sec. Thomas Perez is rumored to be on the shortlist for the next attorney general but critics warned Wednesday his partisan bias disqualifies him from the position.

Perez was appointed as labor secretary in 2013 following a career as a union and civil rights advocate. Democratic presidential nominee Hillary Clinton is rumored to be considering him for attorney general. America Rising Squared (AR2) argues he is way too partisan for the role.

“It’s critical that the next attorney general is not a partisan operator, but someone with a record of putting the rule of law before politics,” AR2 communications director Jeremy Adler told InsideSources. “[Perez] was caught playing political footsie with Clinton campaign chairman John Podesta on government time.”

AR2 is a nonprofit research group that promotes conservative policies. Perez endorsed Clinton for president in December 2015 and has since campaigned for her. Wikileaks released emails last month that indicate Perez has been advising the Clinton campaign.

“That kind of behavior makes him unfit to serve as attorney general, especially today when the American people are looking for the Justice Department to serve as a trusted, neutral arbiter in these high-profile investigations,” Adler said.

The Associated Press first reported Oct. 24 that the labor secretary was being considered as a possible attorney general. Perez had previously served as the assistant attorney general for the Civil Rights Division at the Department of Justice.

Perez mostly emailed the campaign using a private email but did occasionally use his official government account too. The Washington Free Beacon reported Oct. 13 that such behavior might have violated federal law. The Hatch Act prohibits public officials from engaging in partisan activities on government time.

AR2 also argues that the labor secretary has shown a clear bias in the policies that he has pushed. He has allegedly pursued reforms that favor unions over private-sector businesses. AR2 previously noted that many of those policies have hurt both job growth and the economy.

The Department of Labor has been the primary source of new workplace regulations during the current administration. The National Association of Manufacturers (NAM) found in a report Sept. 22 the new regulations could cost $81.6 billion in compliance alone and 155,700 lost jobs over the next ten years.

Attorneys general are nominated by the president and approved by the Senate. Perez was also rumored to be among those being considered for vice president. Clinton eventually picked Virginia Sen. Tim Kaine on July 22 to be her running mate.

Perez and the Clinton campaign did not respond to a request for comment by InsideSources.