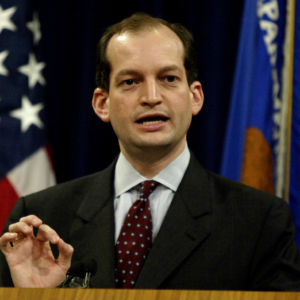 Alexander Acosta was nominated Feb. 16 to lead the Department of Labor (DOL). The labor secretary position is one of the last major nominations to be filled with the process facing several delays and setbacks. Senate Democrats asked the nominee a range of questions regarding his past and plans for the department.

“Helping Americans find good jobs, safe jobs, shouldn’t be a partisan issue,” Acosta said during the hearing. “We may not agree on how, but at least we can agree on the need.”

The Senate Health, Education, Labor, and Pensions committee held the confirmation hearing. Democrats on the committee asked about a proposed federal budget that would cut the department by 21 percent.

“How are you going to approach this,” Democratic Sen. Tammy Baldwin asked during the hearing. “Are you going to do 21 percent across the board or do it by bureau.”

The Republican proposed budget would make significant cuts across the federal government. It would slash the labor department by $9.6 billion. The department cuts would amount to a 21 percent decrease from the last budget.

“My personal perspective is it shouldn’t be across the board,” Acosta answered. “I think this requires a thorough review.”

Acosta added the review should determine whether a program is effective and if funds can be better utilized elsewhere. Committee Ranking Member Patty Murray asked about a recent update to overtime rules which is pending before the courts.

“The rule helped restore the 40 hour work week,” Murray said. “Do you believe workers should be paid overtime for the hours they work.”

Managers and executives currently cannot qualify for overtime if they have a salary of at least $23,660. The new rule is designed to increase the overtime salary exemption to $47,476. It also included provisions that would require employers to prove their workers are in an exempt position. Critics contested the increase is too big and rapid.

“Something that needs to be considered is the impact it has on the economy,” Acosta answered. “It’s something I will look at if my nomination is approved.”

The rule was last updated in 2004. Acosta believes the rule probably should have been updated, but warns it was done in a way that may have hurt businesses.

Acosta is an attorney who currently serves as dean of the Florida International University College of Law. Former President George W. Bush previously appointed him to serve on the National Labor Relations Board (NLRB). He has also been an assistant attorney general and federal prosecutor.

The DOL plays a critical role in issuing and enforcing workplace regulations. Former President Barack Obama instituted much of his economic agenda through the department. He hoped to strengthen worker rights, but critics contest he did little to help workers while putting unnecessary stress on employers.

Acosta noted during his opening statement that his views regarding labor stem from his parents. His parents were poor immigrants but worked hard to give him a college education. They were always able to find work. Acosta is concerned work isn’t as available now as it was then.

Acosta has been seen by some opponents as a more moderate choice for labor secretary. CKE Restaurants President Andy Puzder was originally nominated for the position by eventually dropped out. Democrats and labor unions relentlessly attacked him for his lack of government experience and alleged conduct as an employer.

Acosta has even been able to earn praise from some union leaders. AFL-CIO President Richard Trumka stated his nomination deserves serious consideration. Trumka and many other union leaders were highly opposed to Puzder, and even touted his leaving as a success for the labor movement.