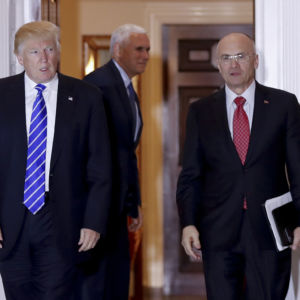 Labor Secretary Nominee Faces Battle Between His Own Employees

President Donald Trump’s pick for labor secretary has been denounced by critics for mistreating his own employees, but supporters Tuesday argued the opposite is true.

CKE Restaurants President Andy Puzder was nominated Dec. 8 to become the next labor secretary. The Fight for $15 movement has launched protests, claiming his own employees oppose him. Republican lawmakers, supporters, and a handful of people working for franchises of CKE brands countered the critics at an event on Capitol Hill.

Puzder oversees several franchise chains including Carl’s Jr. and Hardee’s. The Employment Policies Institute (EPI), a conservative advocacy group, hosted the event to make the case the opposition doesn’t reflect reality. Franchise employees at the gathering contested that they are happy with where they work.

“The manager now, that I have, she gives me flexible hours, so if I need to go to an awards assembly for my children, I know that I can,” said Carl’s Jr. employee Cherie Abarquez. “She works with me when it comes to my children. She’s always been that way. It’s an awesome place to work. I love being there.”

There were only a handful of employees, however, that attended the hearing. EPI Research Director Michael Saltsman argues the group reflects a much larger consensus. EPI released a survey Jan. 10 which showed that employees at those franchises are generally satisfied with their jobs.

“What we’ve seen from the survey of employees is that their stories are special, but they’re not unique,” Saltsman said at the event. “We’ve seen from talking to employees at Carl’s Jr. and Hardy’s franchises around the country that there’s broad satisfaction with the workplace, that they feel safe and respected.”

The survey found that 92 percent of employees agree that Carl’s Jr. and Hardee’s are great places to work. The Fight for $15 movement, however, argues the employees actually oppose Puzder and his stance on numerous workplace issues.

“The next four years are going to be about low pay, wage theft, sexual harassment, and racial discrimination,” Fight for $15 states on its website. “He opposes the minimum wage. He thinks workers are overprotected. He is against unions. He even said he wants to fire workers and replace them with machines.”

Puzder isn’t completely opposed to the minimum wage, despite what many critics have contested. He does oppose the $15 minimum wage but isn’t outright opposed to moderate increases. Dwyer Group Chairwoman Dina Dwyer-Owens notes he expressed similar views while serving on the International Franchise Association board.

“He was one who, in discussions, was certainly open to increasing the minimum wage,” Dwyer-Owens said during the event. “I think he has very specific ideas on how best to do that because it can also cause many challenges.”

The Fight for $15 movement launched its largest protest against the nominee Jan. 12. It reported that franchise employees from across the country participated in it by rallying outside their place of work. Saltsman believes the protests and opposition don’t reflect the overall consensus among the franchise employees.

“This isn’t unique to the restaurant industry, I’m sure within the halls of Congress there are a couple people working who may not love their jobs,” Saltsman said. “But I think the important takeaway is that those voices don’t define the Carl’s Jr. and Hardee’s brands.”

The Fight for $15 movement has been aggressively opposed to the nomination, but it’s not Puzder’s only critic. The Restaurant Opportunities Centers United, a union advocacy group, released its own survey Jan. 10 that found franchises of CKE brands are rampant with sexual assault and over staffing.

Democratic lawmakers and labor unions have been particularly opposed to his nomination. Democratic Sen. Patty Murray and AFL-CIO President Richard Trumka argued during a press call Dec. 22 that the president has already betrayed his promise to the working class by picking Puzder.

The Competitive Enterprise Institute (CEI), however, is leading a coalition urging his approval. A letter was signed by 17 free-market organizations that hope he can bring balance to the Department of Labor. His supporters have argued the department has become overly politicized and has overregulated the economy.

The Senate is scheduled to hold a hearing next week to determine whether his nomination will be approved. Puzder, if approved, would be the top federal official for enforcing and issuing workplace policies. He would play a key role in shaping the economy and the national workforce.

The Fight for $15 movement did not respond to a request for comment.