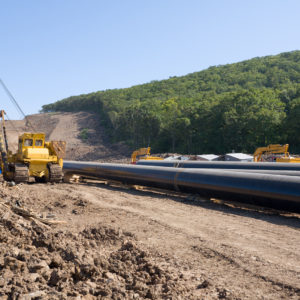 Lack of FERC Appointments Threatens to Hold Up Infrastructure Projects

President Donald Trump has made infrastructure spending a focus of his first term, promising $1 trillion in new investments. However, unless he works quickly to name new commissioners to the Federal Energy Regulatory Commission, the promised upgrades to pipelines and the electric grid may stall before they even begin. After the resignation of the FERC chairman in January, the president has three FERC appointments to make, and a minimum of one seat must be filled before the commission can have an official meeting, let alone approve an infrastructure project.

In late January, former FERC Chairman Norman Bay announced his resignation. Bay’s resignation was expected and came the same day that Trump appointed Commissioner Cheryl LaFleur to lead the agency. Bay’s resignation letter praised FERC as “one of the best agencies in government” with “strong leadership and engaged staff.” Since Bay’s resignation, however, this leadership has been lacking. Out of the five seats on the commission, only two are filled.

FERC’s monthly agenda meeting was cancelled in February due to the lack of a quorum. At the same time, it delegated authority to FERC staff to accept and suspend rate filings, take action on waiver requests, and accept uncontested settlements. Since then, the commission has not officially met.

Although not well known outside of specific policy circles, FERC plays an essential role in energy infrastructure development. The commission regulates the interstate transmission of electricity, natural gas, and oil and is responsible for approving the siting of interstate natural gas pipeline and terminals, as well as the siting of some electric transmission projects. Members of the commission are appointed by the president and confirmed by the Senate.

The empty seats on the commission worry developers and energy companies, who fear that the already-lengthy permitting process could take even longer. Already, industry groups are saying that FERC appointments could potentially delay about $15 billion in infrastructure projects this summer.

One such project is the PennEast pipeline, a 120-mile-long natural gas line in eastern Pennsylvania, which is waiting on final FERC approval before hopefully starting construction this summer. However, as FERC appointments remain in limbo, the likelihood of construction starting on time is dwindling.

“I think it’s virtually impossible for FERC to approve the certificate before July,” said Carolyn Elefant, an energy attorney who formally worked for FERC, to The Morning Call.

The PennEast problem is just the latest sign of an issue that began shortly after the inauguration and which will continue until the necessary appointments and confirmations are made.

“The most significant barrier to building this infrastructure is often the permitting and approval process,” wrote INGAA president Donald Santa in a letter to Trump in January. “We must have a functioning FERC to move forward with building this critical energy infrastructure.”

The delay is stranger since several names have been floated for the open spots. Keven McIntyre, head of the energy consulting practice wing of Jones Day, is one. So is Robert Powelson, the new president of the National Association of Regulatory Utility Commissioners. The final name is Neil Chatterjee, energy policy staffer for Senate Majority Leader Mitch McConnell, R-Ky.

Since these names surfaced in late March, little action has been taken on formal appointment. The administration has said little on FERC appointments, much to the frustration of industry players.

Thankfully, some in the Senate, particularly Sen. Lisa Murkowski, R-Alaska, are pushing for the speedy confirmation of FERC appointments.

“After next week, FERC will need a full complement of commissioners as soon as possible so that it can tackle the important work on its busy docket,” Murkowski said in a statement in January. “The Senate’s challenge will be to promptly consider, without undue delay, FERC nominations once they are received.”

Adding to the pressure, Commissioner Colette Honorable’s term is set to expire in June. Honorable is, at present, the only other sitting member of FERC. The other two FERC seats have been sitting empty since last fall, when commissioners, Philip Moeller and Tony Clark, left the agency for the private sector. Although FERC is not generally a partisan board, the sitting president may fill up to three seats with members of his own political party.