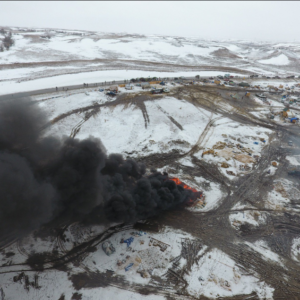 Two years ago, environmental protests splashed back into the headlines when protests against the Dakota Access Pipeline drew thousands of people to makeshift protest camps in North Dakota. Over the course of the protest, which lasted for months on end, protesters repeatedly clashed with police, petitioned the federal government, and sent out social media appeals for support. For journalists covering the event, one key question was how to describe the camp’s occupants. Although area law enforcement and the energy company called them pipeline protesters, they referred to themselves as “water protectors.” Others suggested that eco-terrorists might be a closer term. Now the Lakota People’s Law Project, a key indigenous environmental group is issuing an open letter to President Donald Trump.

Last week, the Lakota People’s Law Project posted an open letter to President Trump online, asking the general public to sign on and signal their concern about the way environmental protesters are being treated by law enforcement.

“The First Amendment of the Constitution allows for and prioritizes the need for dissent. It protects even the abhorrent expressions of white nationalist fervor you failed to adequately condemn in Charlottesville,” the letter reads, referencing a statement by Trump blaming “both sides” for violence at a neo-Nazi rally in Charrlottesville, VA last year. “And it certainly protects the rights of people to vocally oppose dangerous fossil fuel infrastructure.”

The letter calls on the president to ensure that environmental protesters are not treated “like terrorists.” However, it is difficult to make the case, first that environmental protests are treated in this fashion, and secondly, that the president has the necessary authority to change how states and local law enforcement react to protest activity.

At the heart of the matter is federalism. Although the letter itself is addressed to President Trump, many of the policies environmental protesters find so odious are, in fact, state laws over which he has no authority.

“Now, however, on your watch, those freedoms are disappearing. In 20 states, legislators have passed or are considering 30 different laws that, in one way or another, curtail our freedoms to assemble and speak freely,” the Lakota People’s Law Project letter continued.

For more than a year, left-leaning groups have been fretting about an increase in state legislation raising the penalties for certain protest activities, including blocking traffic and interfering with energy infrastructure construction.

In North Dakota, during the Standing Rock protests, and later, in Minnesota, during protests over the shooting death of Philando Castile, protests forced sections of highway to be closed. Afterward, state legislatures raised the question of whether protest activity that specifically moved to block roadways should be prosecuted differently.

“Each of the protests described above reflects a success of our representative democracy: People came together, voiced their dissent, and created change,” wrote Lee Rowland and Vera Eidelman, lawyers for the ACLU.

According to Rowland and Eidelman, protest is a constitutionally protected right, while driving is merely a privilege. They argued that the First Amendment protects not just the general right to protest, but specifically, to do so in the streets. Futhermore, law enforcement already has mechanisms to arrest protesters for trespassing and similar offenses.

“When protests were so robust that they spilled into the streets in Baton Rouge, for example, or into the Mall of America, the problem wasn’t that law enforcement lacked the ability to arrest anyone engaged in wrongdoing,” they wrote. “Quite to the contrary, in both cases, the issue was that police relied on existing trespass or obstruction laws to dramatically — and unconstitutionally — overcharge peaceful protesters.”

The use of the term “overcharge” shows that much of the matter comes down to interpretation. Several states, including North Dakota and Louisiana, passed laws to strengthen the penalties for pipeline protests after protest camps sprung up. Other states proposed, but failed to pass similar legislation.

Even so, these differences are not in the president’s hands to resolve. The legislation in question was proposed at the state level, where many of the proposed bills failed to pass. According to the International Center for Not-for-Profit Law, only 9 pieces of legislation giving riot gear to police, increasing the penalties for protesters who conceal their identities, or changing the severity of the legal penalties for protesting offenses have become law. The president lacks the authority to change the policies of state and local police.

The letter also criticized law enforcement techniques used by local law enforcement during the Standing Rock protests, including the use of hired private security contractors.

For the Lakota People’s Law Project, all of this is unacceptable. Even so, the text of their letter leaves it unclear if they expect Trump to personally prevent all of this from taking place, or hint that they will take matters into their own hands.

“Those who exercise their First Amendment rights to assemble and speak in defense of the earth must not be treated like terrorists. Not on our watch,” the letter concludes.