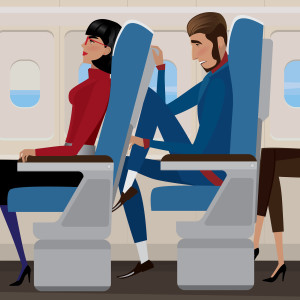 Lament of the Airline Coach Passenger

The vice president for mollifying irate customers of one of the great airlines — there are only four left, and by the time you read this they may be down to three — has written me asking how I “enjoyed” my last flight.

I wonder if this jokester even knows what that word “enjoy” means? Do they have access to dictionaries at Big Air? I couldn’t even get a second cup of coffee from a surly flight attendant, who only wanted to sit in the back of the plane and kvetch about the latest merger.

Definitely, asking you about the quality of your flight is in dubious taste: Have any Big Air executives ever walked back to coach, where we sit like rowers without oars in a trireme.

My missive from Big Air asks questions like, “How did you enjoy your reception at the check-in?” It said I should evaluate my level of experience from “very satisfied” to “very dissatisfied.”

How can you relate in those terms to a machine called a “kiosk”? As it so happens, my kiosk had serious socialization problems. It’s the seventh kiosk from the left at Washington Dulles International Airport, and it’s determined to prove its recalcitrance from the get-go. It rejected my credit card; it didn’t know my frequent flier number; it told me I wasn’t flying anywhere, as I didn’t exist because it couldn’t “get my record.”

It became quite civil, though, when trying to sell me a larger seat, take a fee for my baggage, and offering to sell me more frequent flier miles. What for? Does Kiosk No. 7 know they have 304 blackout days a year?

Having secured my ticket, I moved on to security — where some TSA worker any day now may be nabbed by a casting director for the archetypal role of a terrorist — which took a grim view of me. I stood bereft of shoes, belt, wallet and all identification so that I could put my hands in the air in a glass contraption. Another incipient movie bad guy examines the screen. Not good enough. I got wanded. Of course, if someone had made off with my plastic tray of possessions while this was going on, I’d have become stateless: undocumented, illegal.

Then I found that I was in Zone 4 for boarding. I’m always in Zone 4, no matter when I book my flight. I supposed I was pre-selected for Zone 4 on account of some library book I never returned. This meant there wouldn’t be any room for my suitcase in the overhead compartment, and it would be taken from me as though I’d been apprehended doing something I shouldn’t.

At least I was saved from sitting in a seat too small for its designed purpose for 20 minutes more than necessary. The seat that was too small for me, too small for smaller people, and very much too small for the enormous man who sat next to me.
Did you know they’ve got new seats now without a place to put your book or magazine? They have slim backs to reduce comfort so more seats can be jammed in.

Then there was the toilet. You must use the one in the back because the people in first class — actually they’re not people, they’re corporate lawyers, a subset of homo sapiens — cannot be expected to share their spacious commode with the likes of coach travelers, who have a social disease: less money.

Here’s a toilet tip you’ll appreciate if you’re a man: Decide which bodily function you plan to execute because there’s no room to turn around. No. 1, walk straight in; No. 2, back in. Women always have to back in.

The pilot came on. He sounded as though his last job was playing a trail boss on radio. You know, that special kind of speech that Easterners think Westerners actually speak: all about “critters” and “dudes,” and how we’re going to “canter over to LA.”

It was going to be five bleak hours of discomfort. But the good news is passengers won’t have to endure seats much longer. Coming to an airline near you: standing room only and meat hooks for safety belts.