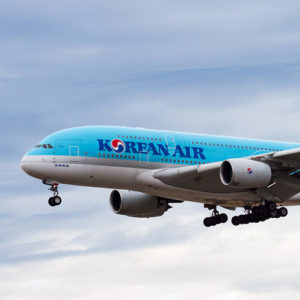 “The last plane out” — the phrase has overtones of drama, of life-or-death struggle, a city under attack, under siege on the brink of surrender.

I had reserved the flight well before KAL announced suspension of the thrice-weekly service, and I expected to find myself on a nearly empty plane. No way.

The flight was nearly full of passengers of all ages, young people whose schools had stopped classes, middle-age professionals whose jobs no longer existed, elderly men and women who’d been living in the United States for years but were anxious to reconnect with families back home, Korea.

The flight was fine, but the atmosphere a little different. Unlike on the streets of Washington, everyone on board was wearing a mask, and most people had on gloves. By the time we landed in Incheon 14 hours later I was pretty used to them.

The reception at Incheon was another matter. Lots of people clad in white were there to make sure everyone eventually got through. Someone installed the app on my phone that’s supposed to tell where I am. Not that I know how it works, but I’m pretty sure it’s the one that says “Self-Quarantine Safety Protection.”

The stage that really counts comes after you’ve gone through immigration, picked up your bags, changed money and stepped out of the terminal.

You’re not getting away without the test, an unpleasant pair of jabs with little cotton-swathed sticks up a nostril and down your throat and are told you’ll know within 24 hours whether you carry the disease.

Somewhere in the process I had already picked up a label in the form of a yellow circle on the back of my passport. I wasn’t getting away without at least one night at a facility set up to accommodate incoming passengers while the tiny nose-and-throat samples were under scrutiny in a laboratory.

Soldiers and policemen were lurking around to make sure I got on a bus for the ride to wherever I was supposed to go.

It was well after sundown that I was ordered onto an empty bus, the only passenger, seated opposite a soldier whose job apparently was to be sure I did nothing to upset the driver, clad in white, shielded by a vinyl barrier from passengers who might be carrying the disease or otherwise inclined to make trouble. I assumed we were going somewhere near the airport.

As the bus thundered down near-empty expressways, I began to realize the Seoul-Incheon megalopolis was behind us. Eventually I saw a sign saying “Pyongtaek” then signs to “Cheonan.” That was our destination. No, not the city itself but an outlying forest area. The road was narrow and twisting, leading to a structure that I vaguely recall was a “youth center” set aside for international passengers like me.

A gentleman named Mr. Kwon, clad in hooded white garb like everyone else, was on hand to greet me, the lone passenger. He was, he said as he had me fill out a form, from the foreign ministry. Yes, he worked on the North Korean desk. No, he did not know how many North Koreans had died of the disease.

The building was quiet. No guests were seen in the corridors, no sounds wafting from the rooms. About 90 people were there, Mr. Kwon told me, but the rules were strict. I was not to venture outside my room.

OK, I didn’t mind sleeping on a yo, the traditional Korean bedding, and forget about a TV, which I don’t watch much anyway, but I would have liked a chair and a table.

The prospect of spending two weeks quarantined there was not heartening. Soon after breakfast was announced on a loudspeaker and a food pack placed outside my door, another gentleman garbed in white showed up bearing a single piece of paper summarizing the outcome of my test: “negative.”

I would be free to go on another bus to Incheon airport and self-quarantine for two weeks at my address in Seoul.

I’m not stepping outside for a cup of coffee while trying to figure out that app they installed at the airport.