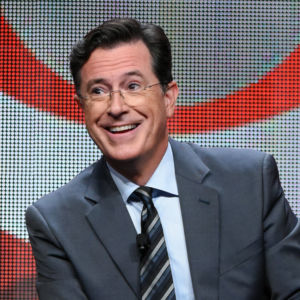 FILE - In this Aug. 10, 2015 file photo, Stephen Colbert participates in the "The Late Show with Stephen Colbert" segment of the CBS Summer TCA Tour in Beverly Hills, Calif. Colbert says he came awfully close to not making his much-ballyhooed debut on "The Late Show" this week. Colbert, opening his second program on Wednesday, Sept. 9, 2015, said that a combination of an overstuffed show that needed to be edited and a technical glitch temporarily preventing producers from sending the finished product to the network. (Photo by Richard Shotwell/Invision/AP, File)
News

Late-night comedy jokes about Donald Trump outnumbered those about Hillary Clinton more than 3-1 from last September to April.

That’s the big takeaway from unpublished research by the George Mason University Center for Media and Public Affairs, shared with InsideSources on Thursday by the center’s director, Robert Lichter.

The data show 1105 jokes about Trump, the presumptive Republican presidential nominee, compared to 315 about Clinton, his Democratic counterpart, told collectively by Jimmy Fallon on NBC, Stephen Colbert on CBS, Jimmy Kimmel on ABC and Trevor Noah on Comedy Central.

These numbers came to light after a rough couple of weeks for Clinton with comics, including an extended, explicit riff from Colbert casting her as untrustworthy over her email scandal and Noah’s suggestion that, since America’s two choices are “Grandma Nixon” and “a traffic cone soaked in raw sewage,” “maybe you shouldn’t have an election.”

“The gloves came off on Trump long ago,” Lichter said in an interview. “Now you have [Clinton] with a scandal, and the jokes get nastier.”

In fact, Lichter said the FBI’s conclusion that the then-secretary of state was “extremely careless” with classified information on her private email had two effects on comics: making it safer for their jokes to be tougher, and solidifying the narrative about Clinton and dishonesty.

“If she starts to fit the image of the political insider who thinks she can get away with things, there will be a lot of jokes around that,” he said.

American University media studies professor Jane Hall agreed that the email issue lends itself to satire, especially since voters are mentioning it in national polls.

But in an interview, she speculated that the subject will only remain relevant to comics if it stays in the news.

“If it does continue as a prominent story line, they’ll be doing Donald Trump a favor,” Hall said of the comedians. “I also hope that they don’t let Trump off the hook. Unfortunately, some of what he’s said, which used to be fringe and outrageous, has been normalized.”

(It’s also true that Trump has been excoriated by comics, and a 22-minute monologue against him by HBO’s John Oliver went viral, as Lichter pointed out in the Washington Post.)

However Trump and Clinton fare with late-night in the coming months, it seems clear neither will be treated as gently as the current occupant of the Oval Office, President Barack Obama.

“Obama had by far the best treatment by late-night comics of any presidential candidate we’ve examined going back to 1992 — and that’s quantifiable,” Lichter said.

His past research found comics were much tougher on Republican nominees John McCain and Mitt Romney in 2008 and 2012 than they were on Obama in those years.

Lichter’s theory on this has to do with the president’s personality and temperament — that comics see him as reserved, intellectual and simply not that funny.

Hall, for her part, said too many media figures were swept up in Obama’s “hope and change” idealism, particulary at its height in 2008. “I would agree that Obama in general got favorable attention from many people in the media,” she said. “That’s a fair criticism.”