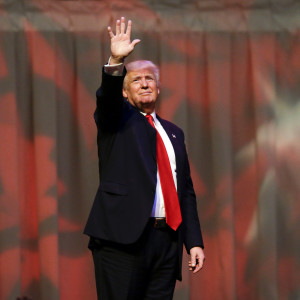 As the Republican Party has embraced a presidential candidate disliked by 80 percent of Latino voters, prominent Hispanic conservatives have spoken out against him.

Yet at a sparsely attended session of the Young Republican Biannual Leadership Conference in Washington last Friday, some of these same leaders signaled new openness to supporting GOP front-runner Donald Trump if he changes his rhetoric on key Latino issues like immigration in the general election.

“Donald Trump is, as he likes to say, very flexible. We’ve seen it on a number of issues where he’s constantly changing his mind. I wouldn’t be surprised if, on immigration, he actually moves to the center,” said Alfonso Aguilar, president of the Latino Partnership for Conservative Principles.

Aguilar has repeatedly blasted Trump in the press throughout the primary, and he wasn’t ready to back the GOP front-runner on Friday. “However,” he said. “I’m very practical as well.” He went on to note that the alternative in the general election looks likely to be Democrat Hillary Clinton, whom he can’t abide.

It was a striking departure from Aguilar’s comments to Politico in October: “If Trump is the GOP nominee, he will not have our support. We will not work to elect him.”

“On the record we’ve been highly critical of Donald Trump,” he said. “We’ve said we’re not going to support him, the whole #NeverTrump, all that, in Spanish, in English. However, if he wins the primary, I think it depends on him. He always talks about, ‘Let’s make a deal.’ Well, hey, open the door, and we’ll negotiate in good faith.”

At the same time, Mario Lopez, president of the Hispanic Leadership Fund, was dubious about Trump’s ability to pivot with Latinos. Since launching his White House bid, the business mogul has pledged a “deportation force” to round up undocumented immigrants and expel them from the country. He’s also described immigrants coming across the border from Mexico illegally as “rapists,” “bringing drugs” and “bringing crime.” Lopez said Republicans have to face the harsh truth that Trump is “motivating people to come out and vote against him.”

But Manny Rosales, who worked on Hispanic outreach as deputy director of coalitions for the Republican National Committee between 2008 and 2010, was more optimistic. “I think we can make a deal with the man if he wants to win,” he said, referencing Trump’s famous business advice book “The Art of the Deal.” Rosales echoed Aguilar in suggesting the candidate might moderate, noting that his campaign is already courting potential Latino surrogates.

“Look, if it’s Hillary and Donald, I’m Donald,” he said in an interview with InsideSources.

All four Hispanic conservatives told the Young Republicans that the GOP has major work to do with their community, and two said the RNC has failed to make meaningful outreach to Latinos after declaring it a priority in the so-called “autopsy” report following the 2012 election.

For example, Muniz said RNC Chairman Reince Priebus “looked at me personally” and promised to speak out when Republicans across the country made offensive comments about Hispanics, but that hasn’t happened.

Similarly, Rosales said nothing came of him giving Priebus a letter on strategies the party should pursue.

“I have amazing respect for the people at the RNC,” Muniz said. “They are working hard everyday, and they have to balance all sorts of interests. I understand their position. But maybe I can be the person that can cause them a little friction in the media.”

Aguilar seemed eager to avoid such friction, pushing back on criticism of the RNC.

“The Republican Party is doing as much as they can,” he said. “Reince Priebus has done as much as he can.”

A bigger priority, in Aguilar’s view, is the influence conservative talk radio has in scaring GOP elected officials of being called “RINO” — Republican In Name Only.

“We need leaders that have the balls to actually say, ‘I’m conservative and for immigration,’ because right now they’re afraid,” he said. “If you talk to Congress — and it’s happened to all of us — the majority of Republicans in Congress want to do something on immigration. They’re sympathetic. They’re just afraid.”

In letting the RNC off the hook, though, Aguilar may be in the minority among conservative Latino politicos.

“Reince Priebus and the RNC can put together all the elaborate plans they want. It simply comes down to execution, and they have failed to execute,” said Stephen Viramontes, CEO of the Arizona-based group AssureVote, in an interview with InsideSources.

Viramontes, former field director of the conservative LIBRE Initiative, also said, “They’ll probably be upset that I’m saying this, but there are no visible effects of any progress being made in the Hispanic community with Republicans by Republicans for Republicans.”