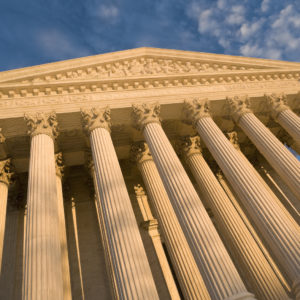 The U.S. Supreme Court could soon hear a case aimed at ending mandatory union dues for all public-sector workers across the country.

The lawsuit argues that mandatory union fees in the public sector are a violation of the First Amendment. Lead plaintiff Mark Janus filed the lawsuit alongside two other Illinois state workers. The nation’s highest court could be next to hear the case currently pending before the Seventh Circuit Court of Appeals.

“Basically this is nothing more than forced political speech,” lead attorney Bill Messenger told InsideSources. “If the First Amendment should prohibit anything, it should prohibit the government from forcing someone to support the speech of another about matters of public policy.”

The lawsuit is directed at the American Federation of State, County and Municipal Employees (AFSCME) Council 31 and the Teamsters Local 916 with the ultimate goal of ending mandatory union fees for all public sector workers. Once a union organizes a workplace they can require payments from workers in states that don’t have right-to-work protections.

A worker can petition to leave their workplace union, in which case they are only required to pay a representation fee. That fee can only cover the cost of representing the workers and not other union activities like politics. The lawsuit argues public sector collective bargaining and political lobbying are indistinguishable.

“What you see in the public sector is that states are forcing their employees to support an organization that lobbies the state over certain matters of public policy,” Messenger said. “We see it as one of the largest regimes of compulsory speech in the country, and that it should be something prohibited under the First Amendment.”

The National Right to Work Legal Defense Foundation (NRTW) has been assisting the state workers in partnership with the Liberty Justice Center (LJC). Messenger is a staff attorney with NRTW. They involved themselves early on when the case hit a few roadblocks that threatened its success.

“This case started after Illinois Gov. Bruce Rauner issued an executive order directing the state to stop taking union fees from state workers who were not union members,” LJC attorney Jacob Huebert told InsideSources. “At the same time, he filed a lawsuit in federal court asking the courts to declare that was correct.”

“When we saw that situation arise, we wanted to make sure the case went forward so we intervened on behalf of some Illinois state employees who had been forced to pay union fees against their will,” Huebert said. “Shortly afterward the federal judge in that case ruled the governor did not have standing to proceed with the case, but our clients did.”

Labor unions have several arguments for why mandatory union dues are fair. The most widely used is that optional dues encourage workers to free-ride. Once a union gets voted in as an exclusive representative, it must represent all workers in that workplace.

“These mandatory fees prevent the problem of free-riders, employees who enjoy raises and other benefits provided by the union without paying for them, leaving their co-workers to pick up the tab,” AFSCME Council 5 wrote last year. “These are known as ‘fair-share’ fees.”

The free-ride argument is used against both lawsuits challenging mandatory union payments and right-to-work laws. Messenger notes the argument isn’t sound because exclusive representation in its own right is a huge benefit to unions. He also argues the unions are essentially forcing their services on workers whether they want it or not.

“These individuals aren’t free-riders, they’re forced riders,” Messenger said. “It’s the unions that impose their representation on these individuals, whether they like it or not, and then lobby the government for certain things whether these individuals want it or not. And generally speaking you can’t force a service on someone, and then make them pay for it if they don’t want it. And that’s what you see here.”

The Seventh Circuit Court of Appeals is scheduled to hear the case March 1. Either side can petition the Supreme Court to pick up the case once the decision is made. Both sides at the moment are hoping the appeals court affirms an earlier district court decision by dismissing the lawsuit, but for vastly different reasons.

“Technically at this point, all parties agree that the district court’s dismissal of the complaint should be affirmed,” Messenger said. “It’s just afterward we plan on petitioning the Supreme Court to take the case.  I imagine the state and unions will oppose that.”

The lawsuit seeks to overturn a previous Supreme Court case, Abood v. Detroit Board of Education. The case affirmed mandatory dues when it was ruled in 1977, and established the exception for political spending.

The Supreme Court might pick up the case as early as this year if the case is appealed and judges choose to intervene. Nevertheless, it faces obstacles. The court is hesitant to overturn past cases.

“If the court takes it up that would be a sign they’re open to overturning Abood,” Huebert said. “There wouldn’t be much need for a case saying, yes, Abood is still good law and nothing else. And the four conservative justices already there now have indicated pretty clearly that they think Abood doesn’t make any sense, that it hasn’t worked well.”

The Supreme Court is also missing a ninth justice, which could result in a tied decision. A split vote would default to the lower court ruling. Friedrichs v. California Teachers Association dealt with an identical challenge but failed when the court split after the death of Justice Antonin Scalia.

“Given the four-four split in Friedrichs, right now the odds are the court would split four-four if they took Janus,” Messenger said. “So the ninth justice will most likely be the tie breaker.”

Judge Neil Gorsuch was nominated by President Trump to fill the empty seat, but partisan gridlock has held up his nomination in the U.S. Senate. Messenger is optimistic the gridlock will be resolved before it becomes a problem for the case.

“The timing should be okay unless there is a very long filibuster or something to that effect,” Messenger said. “But otherwise it shouldn’t be problematic, unless, of course, there isn’t a justice by this time next year.”

Huebert notes the case still has to be heard and ruled on before they can even petition the Supreme Court. But he’s optimistic the court would be interested in hearing the case, given it never resolved Friedrichs. The previous case hint their intent.

“It seems likely that this is a case the court will want to pick up,” Huebert said. “You’d think this is an issue they’d want to take up because, presumably, at least those four conservative justices already thought the court should resolve this issue, and I would think they still do.”

House Republicans introduced a bill last week aimed at making union dues and fees optional for all workers. Republicans hold a congressional majority, making its passage a possibility. Trump has already noted his support for right–to–work laws and is likely to sign such a bill.

Council 31 and Local 916 did not respond to requests for comment by InsideSources.