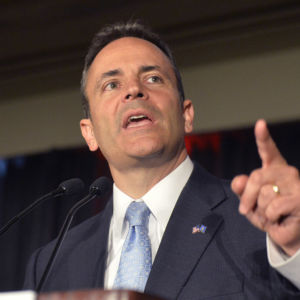 Voters in Virginia, Texas, Kentucky, Ohio and even California poured cold water Tuesday night on the idea the country has taken a sharp turn to the left, rejecting LGBT protections in Houston, sacking a pro-sanctuary cities sheriff in San Francisco and nixing legal pot in Ohio.

Democrats took hits in the off-year election everywhere — from Virginia, where Gov. Terry McAuliffe fell short in an effort to wrest control of the state Senate from Republicans, to Kentucky, where incumbent state Auditor Adam Edelen, considered a potential challenger next year to GOP Sen. Rand Paul, stumbled at the ballot box.

Democratic Governors Association Executive Director Elisabeth Pearson blamed the loss on the energy in the Republican Party created in part by Donald Trump.

“Conway … ran into the unexpected head winds of Trump-mania, losing to an outsider candidate in the year of the outsider,” she said in a statement.

In Houston, voters overwhelmingly nixed a local ordinance to protect housing and employment rights of lesbians, gays, bisexuals and the transgendered after residents balked at a provision that would have allowed transgendered people to use toilets of their own choosing.

Ohio rejected initiatives that could have led to legalized recreational and medical marijuana, in part over concerns that only a handful of producers would hold growing rights.

Republicans added to their statehouse majority in Mississippi, where GOP Gov. Phil Bryant cruised to re-election as well.

And in San Francisco, voters fired Sheriff Ross Mirkarimi, who had defended the city’s “sanctuary city” policies after an illegal immigrant who had been released from his jail was accused of fatally shooting 32-year-old Kathryn Steinle.

Voters in House Minority Leader Nancy Pelosi’s hometown also rejected a crackdown on the “sharing economy,” turning down an attempt by the city to regulate Airbnb, the web-based housing rental service that connects home-owners with people looking for a room for the night.

The results in Virginia were seen as a setback for longtime Clinton family ally McAuliffe and, at least partially, a rebuke of former New York Mayor Michael Bloomberg, whose gun-control group went 1 for 2 in state Senate races despite spending more than $2 million on behalf of Democratic candidates.

“It’s a blow to the governor, but given off-year turnout, the outcome could have been worse,” Kyle Kondik of the University of Virginia Center for Politics told InsideSources. “There was no net change in the Senate and Democrats held up in Northern Virginia, which in presidential years has bigger turnout and could turn the state blue again in 2016. The Bloomberg ads might have helped in a Northern Virginia state Senate race, and might have hurt in a Richmond-area race, where the parts of the district further away from the city went heavily Republican. Still, I don’t think there’s much to say either way about Bloomberg’s intervention: it’s not clear it helped or hurt in any significant way.

“I really would not read too much into it going forward. The Ohio marijuana proposal was a monopoly that was opposed by much of the state’s establishment. Kentucky ended up electing a Republican governor, putting its state-level politics more in line with its deep federal Republicanism. And Democrats did win victories … like netting House seats in New Jersey and winning three key state Supreme Court seats in Pennsylvania. Republicans won the night’s biggest race – Kentucky governor – but I wouldn’t say there’s a ton of national meaning.”

Still, coming just a year after Republicans retook the U.S. Senate and posted the largest majority in the House in almost a century, Tuesday’s election is certain to stoke GOP optimism about 2016.