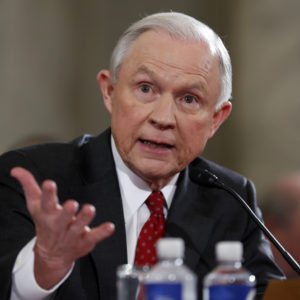 Under Trump, Legalized Marijuana Likely to Remain in Legal Limbo

For years now, marijuana has existed in a sort of liminal legal space. During the Obama administration, the federal government reached an odd sort of separation of powers agreement with itself. Congress still had not voted to change the scheduling status of the plant, but the Justice Department dramatically scaled down the resources dedicated to prosecuting non-violent drug crime. With Sen. Jeff Sessions poised to be confirmed as Donald Trump’s attorney general, many legalization advocates are suddenly concerned about the continuation of this non-enforcement policy.

Under the Obama administration, the federal government took a lax approach to enforcing drug laws and the legal cannabis industry flourished, despite being illegal under current federal statutes.

“Thanks to permissive federal laws in regards to autonomy for the Department of Justice, much of this issue will come down to the personal preferences of the sitting attorney general,” said Ryan McMaken, editor of the free-market Mises Wire.

If so, then Sessions will likely take a stricter enforcement approach than Attorney Generals Eric Holder and Loretta Lynch. However, his answers at the confirmation hearing on Wednesday show that to Sessions, the issue is not as simple as his own personal beliefs.

During the hearing, Sen. Mike Lee asked Sessions about “separation of powers concerns arising out of the Department of Justice’s current approach to state marijuana laws.”

Sessions’s answer reiterated that Congress, not the Executive Branch, is the determiner of drug policy status.

“I think one obvious concern is that the United States Congress has made the possession of marijuana illegal in every state, and distribution of it an illegal act…if that’s something that’s not desired any longer, Congress should pass a law to change the rule,” Sessions said.

“It is not the attorney general’s job to decide what laws to enforce,” he concluded.

An answer to a later question, however, acknowledged that the reality of the situation was murkier than that. The federal government lacks the resources necessary to fully enforce prohibition without help from the states. In jurisdictions that have decided to legalize, this help is not forthcoming.

“I won’t commit to never enforcing federal law,” said Sessions, when asked if he would use federal resources to prosecute people using marijuana in accordance with their state laws. “But absolutely it’s a problem of resources for the federal government.”

Many supporters of decriminalization or legalization of marijuana took Sessions’s statements to mean that as attorney general, he will throw the full weight of the federal system at growers, sellers, and buyers of cannabis and other drugs.

“He’s a nightmare for drug policy reform,” said Ethan Nadelmann, executive director of the Drug Policy Alliance, a drug reform advocacy group. “He looks to have been one of the worst Republicans in the Senate on issues of marijuana reform, sentencing reform, rolling back the drug war. All of it.”

Another advocate feared that marijuana vendors operating in states which have voted to decriminalize would find themselves facing a potential loss of assets if the government decided to start enforcing the law.

“Asset forfeiture is what scares people the most. Having a federal agency come in, shut you down, take your inventory and freeze all of your cash and put you out of the industry,” said David Friedman, former head of the Marijuana Index.

While it is true that Sessions has criticized marijuana use in the past, (most memorably with his line at a hearing last year that “Good people don’t smoke marijuana”), as Attorney General, he will need to justify using limited resources to attempt to enforce drug prohibition in states that may be unwilling to use their own resources to assist.

Trump has signaled that regardless of his personal beliefs, he is unwilling to spend political capital reopening the drug debate. Even some marijuana advocates acknowledge that worries about Sessions are likely unfounded, since the legalization movement has been able normalize itself during the Obama years.

“I’m cautiously optimistic that it’s not going to change,” said Robert Capecchi, director of federal policies at the Marijuana Policy Project. “At this point the toothpaste is so far out of the tube that it’s brushing lots of teeth and I think that there would be a reluctance to waste a bunch of political capital to go after an industry that is providing a commodity that already exists.”