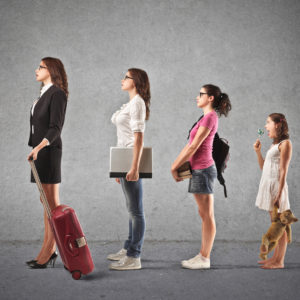 Lessons From Three Mentors Who Shaped My Life

Women’s History Month is a good time to take stock, and lately I’ve heard a lot about the role of mentors. Many have attributed their success to someone who showed them the ropes, gave just the right pep talk when needed or offered constructive criticism.

This got me thinking about three mentors who profoundly shaped me. I grew up with parents who fed and clothed their six children by running a small kosher grocery store. We were the “hired hands” that worked the register, delivered orders to people who couldn’t drive and stocked the shelves. We developed people skills and were good students, but we were a bit rough and lacked the “silver spoon.”

This made my eventual move in the name of education a culture shock. I went to business school, earning the credential, but still not the seasoning of my well-heeled peers. That is until I encountered my first mentor. My first mentor grew up on New York’s Upper East Side, and he had a refined background. He exuded wealth and class, and he was extraordinarily nice to me.

His first lesson was to tell me that the full-length puffy down-filled lavender coat that I wore on the streets of Manhattan, and more important to clients, did not fit the image of a high-priced consultant. I needed something tailored, neutral in color, which spoke of gravitas. I heard him. I went to Lord & Taylor’s and bought a boring navy wool, full-length coat. Now I fit in, and while some might be offended, I was deeply appreciative of his advice. What did I know about these new circles I inhabited?

He later offered me a second lesson when I was a senior consultant and challenged by my team. He cautioned, “Just remember, responsibility goes up. Credit goes down.”

In other words, assume responsibility, and when the project ends, make sure to give credit to those lower in the pecking order. I have never forgotten those words and have passed them along to my children many times.

Two stints later, I was at Hewlett Packard, and these were HP’s good years. The “HP Way” meant something. We were being raised as professionals to do things right and with purpose. No shortcuts allowed.

This mentor taught me that the most important thing in business is to start with a name. “People love to hear their name, so the first thing you do in the morning is to walk around and say ‘hi’ to everyone, by name.”

In the course of doing this, my manager would learn a lot about the individuals on her team. They felt a connection to her, and it humanized our work. It probably explains why she always had high-performance teams. I have summarized this mentor’s lesson as, “People matter, and business is personal. Begin by learning their names, and then learn more.”

My third mentor was my mom — always a very practical woman. She had to be as she raised six children and co-ran our grocery store and still came home in time to make dinner, hear us complain, sprinkle us with optimism, and send us back to our desks to study.

At the end of the night, when she thought she was done, she would spread out the day’s newspaper and have her tea. That was usually when I would crawl out of bed and keep her company.

So what did my mom say that has stuck with me all these years?

When I was feeling tired and dejected about something, she would tell me, “Go to bed. The world will look different to you tomorrow.”

Our modern-day version of this would be that we need mental and physical health to approach our challenges. My mom just shortened it, and it was a great tip that still serves me.

Her second piece of advice was built on her belief in me. My mom would say, “Jillie, you’ll figure it out. You always do. My money’s on you.”

If she believed in me this much, then I should too. She didn’t tell me how I’d figure something out or when, but just that I would. Today, we might rename her advice, “The power of positive thinking.”

Mentoring matters hugely, and I am glad to have benefited so mightily. I aim to pay it forward.