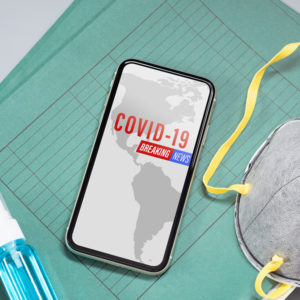 With the United States, like the rest of the world, now consumed with the rapid spread of COVID-19, necessary attention to public health assessments and forecasts is critical.

Public health responses are essential to flatten the growth curve for the virus, enable widespread testing, and allocate resources for sufficient medical professionals and hospitals.

Now is the time for the federal government to assess its role as a public health messenger, since digital trust will be a necessary aspect of dealing with this crisis, too.

According to a Pew Research Center survey conducted in the past year, nearly seven in 10 U.S. adults say made-up news and information greatly affects Americans’ confidence in government institutions. This is a dismal sign indeed.

The COVID-19 pandemic is taking place against a broad reality that the public health information being received — however evidence-based — must first penetrate a layer of public skepticism and cynicism about the messenger itself. This is counterproductive to swift and decisive recommendations that may not be followed as a result.

Other data, however, suggests possibilities for using alternative ways to alert the public online about the virus generally and preventive measures specifically. Here, the 20th-annual Edelman Trust Barometer, a survey index released just a few weeks ago, can serve as a quick reference source for exploring other options.

It reflects another bit of bad news. The Barometer indicates that there are two groups that need to be addressed. The first is what is called the “informed public,” which comprises less than 20 percent of the mass population.

But their socio-economic metrics — those ages 25-64, college-educated and in the top 25 percent of household income — clearly separate them from the rest of the country. And the mass population also does not reflect significant media consumption or engagement in public policy and business news. That’s why it is so important that vital public health information reaches both groups effectively.

Despite the trust gap between them, half of all Americans trust non-government organizations and businesses, while only about 40 percent trust government. And within government, local and state government is trusted more than the federal government.

Two quick recommendations flow from viewing the Pew Research Center and Edelman surveys in tandem. First, it would be helpful to have COVID-19 public health information immediately amplified by non-government organizations and businesses through their websites and social media. This can help reinforce the credibility of that information.

Second, the preferable government pathway for this information should be local and state officials, including, governors, mayors and school superintendents.

Creating greater digital information trust is a larger and broader social problem that needs to be addressed in the long term, of course.

For now, having the right online messengers front and center clearly can be part of a comprehensive approach to the pandemic that is our new normal.