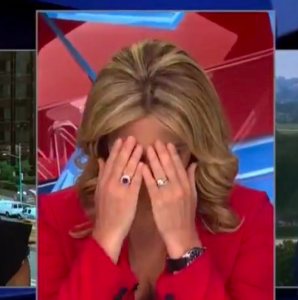 When the Daily Beast’s Matt Lewis described the people who surrounded Sen. Ted Cruz and his wife and chased them out of a restaurant as a “mob,” CNN anchor Brook Baldwin immediately took offense:

“Oh, you’re not going to use the mob word here….Stop, stop,” Baldwin complained, literally shaking her head in disappointment.

“It’s totally a mob,” Lewis pushed back. “There’s no other word for it.” Conservative commentator Mary Katherine Ham, also part of the segment, agreed. “Pretty ‘mobby,'” she quipped.  “If it were Tea Partiers we’d definitely call it a mob, come on.”

“Let me move past the M-word,” the clearly-frustrated Baldwin replied.

She’s not the only person objecting.  At The Week, liberal columnist Joel Mathis complains of “The GOP’s Sneaky Attempt to Paint the Majority as an Angry Left-Wing Mob.”  The Chicago Tribune headline reads “Republicans Stoke Fear of Democratic ‘Angry Mobs’ Ahead of Midterms”

CNN’s Don Lemon says the word “mob” is just President Trump’s “way to undermine anyone who opposes him,” and he, too, rejects the notion that a people who hound public officials in restaurants and hallways are a “mob.”  They are simply taking advantage of their constitutional rights.

“In the Constitution, you can protest whenever and wherever you want. It doesn’t tell you that you can’t do it in a restaurant,” the prime-time cable anchor said.  “To call people ‘mobs’ because they are exercising their constitutional right is just beyond account pale.”

But Democrats and the media didn’t always feel this way, particularly during the height of the Tea Party movement.

Then-CNN primetime host Piers Morgan called the Tea Party movement a “similar mob to Mussolini’s and Hitler’s. The nearest thing to it in America.”

Slate’s Editor-in-Chief Jacob Weisberg attacked the “Tea Party mob” and its “mob mentality.”  Rolling Stone’s Matt Taibbi dismissed the Tea Party as “a weird and disorderly mob,” while at Politico Alex Isenstadt wrote about the “angry, sign-carrying mobs” who showed up at town hall meetings in 2009 to protest their representatives’ support for ObamaCare.

Elected Democratic officials joined in, too.  Texas Democrat Rep. Lloyd Doggett complained about the Republican “mob” that showed up at his 2009 town halls.  Then-Congressman Tim Bishop (D-NY), who was later defeated by a Tea-Party backed Republican, felt the same way:  “There is no point in meeting with my constituents and [to] listen to them and have them listen to you if what is basically an unruly mob prevents you from having an intelligent conversation.”

“It’s like the Salem witch trials, and health care is the witches,” then-Congressman Barney Frank (D-MA) said in 2009. “This is mass hysteria.”

In 2009, the DNC even ran TV ads dropping the “M” word on Republican opponents of ObamaCare:

“Now desperate Republicans and their well-funded allies are organizing angry mobs just like they did during the election,” the ad claimed.

But, as Lewis and others have pointed out, Tea Party groups never “mobbed” politicians during dinner, or chased them into airport restrooms, or sent videos of beheadings to their wives. No Tea Party leader ever appeared on television to tell supporters to “get in the faces of some Congresspeople,” as Sen. Cory Booker recently did.

And while individual Tea Party supporters did behave crudely, they never took over a Senate office building or pounded in anguish on the doors of the Supreme Court.

Despite several massive rallies in Washington, DC and hundreds of others across the U.S., there were only a handful of arrests of Tea Party protesters. More than 300 anti-Kavanaugh protesters, on the other hand, were arrested in a single day last week. Hundreds more have followed.

“If the scenarios were reversed–if a Democratic politician and his wife were hounded out of a restaurant–if conservative protesters were saying things like ‘Confront them wherever they go’ and ‘Don’t let them have any comfort’–the media would rightly decry this as a mob mentality,” Lewis told Inside Sources.  “And I would join them. But I think the lesson I’ve learned now is that when liberals do it, they’re not called a mob, they’re called ‘freedom fighters.’”

This willingness of the media and the Left to defend these “mobby” actions takes this double-standard beyond hypocrisy. Just days after the images of angry throngs and hundreds of arrests on Capitol Hill, Hillary Clinton weighed in and appeared to pour fuel on the rhetorical fire.

“You cannot be civil with a political party that wants to destroy what you stand for, what you care about,” Clinton told CNN’s Christiane Amanpour. “That’s why I believe, if we are fortunate enough to win back the House and or the Senate, that’s when civility can start again.”  There was no media pushback from CNN or any other mainstream media outlet to what even the Washington Post concedes “can only be described as a plea for incivility — at least temporarily.”

“Media professional rightly lament Trump’s attacks on their legitimacy as an erosion of the civic compact. Reporters who paint sympathetic portraits of agitated hordes because they like their politics are being just as reckless,” Noah Rothman, associate editor of Commentary magazine told Inside Sources.