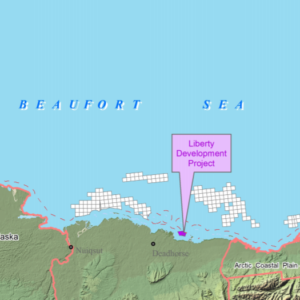 For years, nearly 40 percent of America’s domestic oil production flowed through the Trans-Alaska Pipeline. The 800-mile long line delivers crude from Alaska’s north shore to transport facilities to a marine terminal in Valdez, Alaska. Since the fracking boom in 2008 and the crash of oil prices that followed several years later, shipments along the pipeline have fallen dramatically, as companies moved to develop wells in the lower-48. Despite the growth of fracking, Alaska’s North Slope still has proven reserves and companies are working to develop these offshore fields. On Thursday, the Bureau of Ocean Energy Management released a draft environmental impact statement on the Liberty Project, a proposed development in the Beauford Sea that has the potential to deliver some 120 million barrels of oil

“Today’s publication of the draft EIS is another important step in the Department’s strategy of responsible resource development and we are committed to working with states, Alaska Native communities, investors and all stakeholders when we analyze development and production plans,” said Vincent DeVito, Counselor for Energy Policy at Interior, when the statement was released.

The Liberty Project would be the first oil development in federal waters in the Beauford Sea, a portion of the Arctic Ocean on Alaska’s north shore east of Barrow. Four previous developments have been built in state waters about 40 miles away, but the Liberty Project will be built five miles offshore in federal waters. Drilling inside the Arctic Circle poses its own challenges. Because this section of the Beaufort Sea freezes each winter, traditional drilling rigs like those used in the Gulf of Mexico are not an option. Instead, Hilcorp, the company developing the project, is planning to build a nine-acre artificial island to host the drilling facility and the 16 planned wells.

Similar, though smaller, islands have been built in state waters to support development of the Oooguruk and Nikaitchuq fields in the Beaufort Sea.

After preforming a study of the project, the BOEM found that development of the Liberty Project would have remarkably little adverse environmental impact. According to the draft environmental impact statement, the project would have “negligible to minor” impacts on air and water quality, and the company’s proposed mitigation efforts meant that even the little to no impact on fish “would eventually be eliminated.”

“A VLOS [Very Large Oil Spill] is not estimated to occur during the life of the Proposed Action and would be considered well outside the normal range of probability, despite the inherent hazards of oil development related activities,” the report reads.

The publication of the draft environmental impact statement starts a 90-day comment period, during which Hilcorp, the BOEM, and other stakeholders will host public hearings around the state to hear concerns from residents.

The energy industry welcomed the BOEM’s findings. Randall Luthi, president of the National Ocean Industries Association, a trade group for offshore energy development companies, praised the decision, saying that the EIS reaffirmed previous baseline and environmental studies conducted by the industry and BOEM. He added that while the project would not have a significant environmental impact, its effect on Alaska’s economy would be much larger.

“As the U.S. continues its energy dominance agenda, opening up areas offshore Alaska for oil and gas development will still take years. The Liberty Project has the potential of becoming a major source of oil for both Alaska and the U.S in the very near term,” Luthi said.

“This oil could be used to offset declining production in the North Slope and provide a new source of oil for the Trans-Alaska Pipeline and a new source of economic stability that Alaska desperately needs,” he continued.

Development of the Liberty Project would provide a boon to Alaska’s economy.  Alaska depends heavily on the oil and gas industry for both employment and state revenues. According to the Alaska Oil and Gas Association, more than a third of the jobs in the state are tied to the industry. This makes the state’s economy particularly sensitive to fluctuations in the oil market. Between 2015 and 2016, Alaska’s economy experienced a net loss of 6,500 jobs and $680 million in wages, with much of the decline attributable to decline in the oil and gas industry in the state.

While it is too early to predict how many jobs development of the Liberty Project will create, construction of the artificial island and drilling pads will support construction jobs. Staffing the project for its projected 15 to 20-year lifespan will also add jobs.

In addition, development will help the state government, which relies on taxes on energy development for its revenues. Oil companies operating in Alaska pay not only property and income taxes on their developments, they also pay various rents and royalties which are used to fund the state’s schools, courts, public safety, and other government services. In 2016, the oil and gas industry paid more than $1.6 billion in state taxes and royalties, which accounted for 28 percent of all restricted and unrestricted state revenue.

Development of the Liberty Project would also help support the Trans-Alaska pipeline. After decades of running at high capacity, the pipeline has more recently been operating at about 25 percent capacity. If shipments drop too low, it becomes difficult to keep the oil warm enough to stay moving across the hundreds of miles of wilderness. Without the pipeline, however, any oil extracted on the North Slope would be stranded there.

“All of these projects [in the Beauford Sea] allow for the Trans-Alaska pipeline to continue to flow,” says Lucas Frances, spokesperson for the Arctic Energy Center, who emphasized the pipeline’s continued importance. “The Trans-Alaska pipeline has more than paid for itself. This is America’s domestic energy. Most Americans don’t even know about it, but it is a critical part of our energy infrastructure.”

Approval of the Liberty Project environmental impact statement is the culmination of years of effort on the part of four different oil companies. The area was originally explored in the 1980s by Shell before BP Exploration acquired the lease. Plans for development were put on hold for several years before BP began working on initial plans for wildlife harm mitigation in 2010. The project was sold to Hilcorp in 2014.