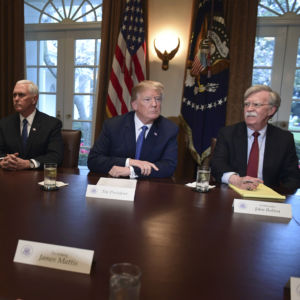 SEOUL — John Bolton, President Donald Trump’s national security adviser, may be hawkish and conservative, but at least you had to credit him with sophistication and having insights on the issues and the people whom he was confronting. In the course of many visits to Korea, he often displayed understanding on the realities of dealing with the North and the need for strong countermeasures against rising threats from the Kim dynasty.

You wonder, though, how much Bolton, after his years at the State Department and the United Nations, knows or understands when he holds up the Libyan “model” as an example for North Korea. If there’s any model that turns off the North Koreans, as anyone who’s been following the rhetoric is well aware, it’s that of Libya.

The country’s seemingly omnipotent dictator, Moammar Gadhafi, the North Koreans often note, made the fatal error of having agreed in secret negotiations to abandon his nascent nuclear program and get along with the Western nations that he’d been confronting for decades.

Actually, Gadhafi’s nuclear aspirations were not nearly so advanced as those of the North Koreans. His physicists and engineers never came close to exploding a warhead. In fact, they were nowhere near building one. He had much to gain by way of trade and aid by appearing as the bad guy who had seen the error of his ways and reformed.

After all that, he paid with his life. That is, in the revolt that overwhelmed his country seven years later, his one-time American and European friends, siding with the rebels, conducted airstrikes against his forces, driving him from the capital city of Tripoli. Forced into hiding and dragged out from under a culvert, he was killed most cruelly by an angry mob.

There could, as far as the North Koreans were concerned, be no worse punishment, no more stunning example of the fate that awaits any ruler so foolish and cowardly as to yield to foreign pressure and give up his nuclear establishment for the sake of appeasing an angry coalition of enemies who would betray him no matter how hard he sought to win their favor.

The Libyan example is so different from that of North Korea as to confuse any argument for or against Kim Jong-un knuckling under pressure to mend his ways and promise to be good. Kim may have driven the majority of his subjects into poverty, depriving them of food, medicine and basic amenities that most of us take for granted. He may have watched the country’s infrastructure, its roads, his railroads, its electrical network, deteriorate, he may have neglected agricultural reform, hospitals and schools, but for sure he’s got nuclear warheads and the missiles needed to carry them to targets near and far.

As Andrei Lankov, noted Russian scholar-author on North Korea and a professor at Kookmin University in Seoul, pointed out at a forum set up in the summit media center by the Inter-Korean Summit Preparation Committee on April 26, the day before the summit: “North Korea is a nuclear state. It’s just a fact of life.” Now Trump is going to try to get Kim to resign from the nuclear club, to which the Americans say he has no right of membership.

All of which means that Bolton had better come up with a new formula for getting Kim to come to his senses and stop wasting his scant financial resources. Up to now, despite the recent summit between President Moon Jae-in and Kim, and then Kim’s announcement that he was shutting down the nuclear test site at Punggye-ri, “complete denuclearization” of North Korea remains an abstraction.

Yes, the North Koreans have promised denuclearization before. There could be no better instance than the deal the North and South struck in 1992 for achieving a “nuclear-free” peninsula ― not worth the vast quantities of paper on which it was printed and disseminated.

Trump likes to talk blithely of walking out of a summit with Kim as if it would be simple to do just that. Kim, however, is going to charm Trump as he did Moon with blandishments and visions of a new era. He’ll come up with a formulation that convinces Trump he’s honestly “honorable,” as Trump has called him, and maybe Moon will say that both of them, not just Trump, deserve a Nobel Peace Prize.

As for Bolton, if he’s still talking about the Libyan example or some other cockamamie formulation, fine. As long as he’s not promoting a pre-emptive strike or regime change, as he’s done in the not-so-distant past, we should be pretty safe from any harm he or his boss might inflict.