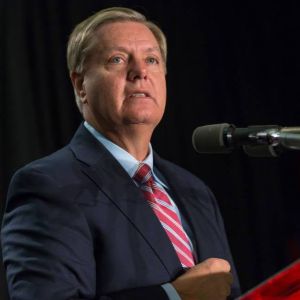 Delivering his most detailed speech on international relations since launching his long-shot bid for the White House last month, Sen. Lindsey Graham, R-S.C., on Wednesday made an aggressive case for more hawkish U.S. foreign policies, including sending tens of thousands of American ground troops to the Middle East.

Graham told an audience at the Atlantic Council in Washington, D.C., that the Obama administration’s approach to the world projects weakness and makes America less safe. “Simply put, President Obama’s foreign policy has been a disaster, and former Secretary of State Hillary Clinton was one of its chief architects,” he said of the likely Democratic nominee for president in 2016.

Among other criticisms, the senator charged that “the strategy articulated by President Obama to degrade and destroy ISIL doesn’t have a snowball’s chance in Hell of working.” He then called for 10,000 U.S. troops in Iraq, 9,800 in Afghanistan and roughly 10,000 in Syria as part of regional force.

“I don’t know how to defend this country without some of us having to go back over there and fight,” Graham said.

To defeat the “religious Nazis” of radical Islam, the senator pledged to do “whatever it takes, as long as it takes,” saying there shouldn’t be any fixed end dates for American involvement in the Middle East. He also used his speech to continue criticizing the one Republican presidential candidate seen as a skeptic of U.S. military interventionism: libertarian Sen. Rand Paul of Kentucky.

“To those on the Republican side who want us to become fortress America, I’m your worst choice,” Graham said. “To my friend Rand Paul, we agree on a lot, but on this we disagree. He is the one voice in the Republican Party that I think has been weaker on national security than that of President Obama.”

In a statement emailed to InsideSouces, Paul’s chief campaign strategist Doug Stafford rejected that characterization, saying Graham’s speech “shows how little he understands about American foreign policy and how to stop making the same mistakes.”

Stafford added that Paul differs from Graham in that he doesn’t endorse sending American tax dollars to “war lords and nations that persecute Christians, women and minorities.”

“Sen. Graham supports the failed solutions of the past — more spending and more counterproductive nation building and policing the world,” the strategist said.

But Paul’s brand of anti-interventionism is unusual in the Republican field. Despite the American public’s war weariness, it’s unlikely that Graham’s foreign policy stances will hurt his campaign.

“The unfortunately reality is that he’s indicative of the id of the Republican foreign policy establishment, even after the significant mistakes of the Bush administration,” said Justin Logan, director of foreign policy studies at the libertarian Cato Institute.

More to the point, Logan told InsideSources that the vast majority of GOP presidential campaign donors are “looking for extremely hawkish policies.” That reality will likely help render public opinion on these issues less important to White House hopefuls.

“The dirty little secret about American foreign policy is that it’s an elite sport,” Logan said. “Elites can get away with doing a lot of things that are unpopular.”

All of this may help explain why Graham was so strident about his stances on Wednesday.

“If you’re too tired to defend this country, too war-weary, don’t vote for me,” he said.

In fact, many political observers, including Logan, think the GOP is unlikely to choose Graham as its candidate. At the moment, the senator is receiving just a few percentage points of support in national polls. He’s also out of step with the Republican base on issues ranging from climate change to immigration.

“It’s important to point out that the guy has about as much chance of being the Republican nominee as I do,” the Cato scholar said.