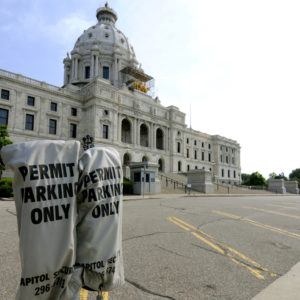 Lawmakers' parking spots were empty in front of the Minnesota State Capitol in St. Paul, Minn., after negotiations over the state budget broke down. (AP Photo/Jim Mone, File)
News

While all eyes have been focused on Washington and the healthcare debate, a full constitutional crisis has erupted in Minnesota, where the governor and state legislature are battling over a funding question that cuts to the core of the principle of divided powers and separate but equal branches of government.

On May 26, the Republican-controlled Minnesota legislature completed its special session and sent a biannual budget to Democratic Governor Mark Dayton. Displeased that the bill did not include tax increases to fund certain state programs, Dayton exercised his line item veto on the appropriations lines that funded the state House and Senate for the next two years.

Worried that without a special session, which the governor has yet to call, they would be unable to pay bills, the legislature has sued Dayton, arguing that his use of the line item veto is an affront to the separation of powers. They claim that if his line item veto authority extends to their budget, he will be able to dispose of the legislative branch altogether.

The battle between the branches continues. On Monday, a judge in Ramsey County, where St. Paul is located, issued a temporary injunction to continue funding the legislature through October. This includes wages for legislators and staffers as well as money for payments for the sublease of the Senate building from the state Department of Management and Budget.

“The failure to fund the core function of the Legislative Branch nullifies a branch of government, contravenes the Minnesota Constitution, and causes irreparable harm to all Minnesota citizens, including the parties to this case,” wrote Judge John Guthmann.

Under the state constitution, Minnesota’s state government is “divided into three distinct departments: legislative, executive and judicial.” Minnesota’s constitution further states that “No person or persons belonging to or constituting one of these departments shall exercise any of the powers properly belonging to either of the others…” except in certain enumerated situations.

Guthmann’s decision provided for temporary funding in order to allow for the continuation of essential state functions. It did not fully address the underlying question of whether Dayton’s line-item veto authority extended to the legislature’s budget. This question is likely headed to the State Supreme Court.

“This situation exposes an internal tension between the state constitution and the line-item veto,” says Kent Kaiser, a political communications professor who formerly worked for the office of the Minnesota Secretary of State.

“In the injunction that the judge just put in place, he noted–wisely–that the constitution lays out core functions of the legislature to which the people of Minnesota have a right and that the right to the continual operation of those core functions outweighs the provision that only money actually appropriated can be spent,” he continued. “It follows that the broader right of the People to have a continually functioning/operating legislature would supersede the governor’s authority to invoke a line-item veto.”

Kaiser notes that how the case is decided has the potential to impact other state offices, including that of the Secretary of State. Although part of the state executive branch, this office is elected rather than appointed, meaning that the governor and secretary of state could be of opposing parties. If the principle of the line item veto is upheld, what would stop a governor from exercising it against other offices held by the opposition party.

Thus far, Dayton’s veto has few defenders. Still, some legal scholars see it as a sign of the weakness of omnibus spending bills.

David Schultz, professor of law at the University of Minnesota and Hamlin University, calls the present constitutional crisis a “long time coming,” but argues that the legislature’s tendency to write omnibus spending bills is partially to blame.

“This legal battle raises separation of powers issues, but also questions regarding the State Constitution’s single-subject rule which mandates that legislation may only incorporate a single-subject…” Schultz writes.  “While Dayton’s line item veto is the immediate cause of the constitutional crisis, flagrant violation of the single subject rule by the legislature is the real culprit.”

Under the single-subject rule, a bill can only address one topic. In this situation, it would have allowed Dayton to veto only the legislature’s tax policy, without touching their appropriations lines. This is a separate issue that likely will not be formally addressed by the Minnesota Supreme Court, even if it chooses to hear the case.

Even more strangely, this is not the first time a legislature has sued a governor who had tried to cut its funding. In April, Democrats in New Mexico sued Republican Governor Susana Martinez, arguing that her decision to use a line item veto to cut funding for the branch would “effectively abolish” the legislative branch and would threaten the “principles of separation of powers and the checks and balances on which our system of representative democracy has been based.” Martinez had vowed to veto a budget that included tax increases and says that she will restore the legislature’s funding once it passes a budget without a tax hike.

The New Mexico State Supreme Court sustained her veto in late May, saying that it was too soon to consider any possible constitutional violations as the legislature prepared for a special session to resolve the budget dispute.

One crucial difference between the situation in New Mexico and that in Minnesota is that the legislature is no longer in session, making the prospect of a negotiated resolution difficult.

Republican supporters hope that, when the court hears the case, it will side with the legislature in defense of the separation of powers. However, the court could follow the reasoning of the New Mexico State Supreme Court, ruling the decision a political one for the legislature and governor’s office to work out.

Until then, the state of Minnesota’s three branches of government remains a bit precarious. Perhaps it isn’t only the state bird that is a loon.