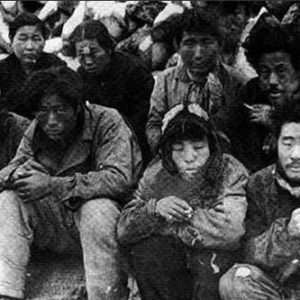 Little Is Known About Korean Massacre

The testimony of two grandmothers from the island province of Jeju about their brief encounters with American soldiers more than 70 years ago offers a glimmer of the U.S. role there before the outbreak of the Jeju revolt on April 3, 1948 (often called “4.3” by Koreans).

One of the women, in a taped interview screened at the 19th World Peace Island Forum at the University of Pennsylvania, moderated by Ko Chang-hoon, professor emeritus at Jeju University, goes beyond vague references to the U.S. military government. Her memories on tape, and her response to questions at the forum, captured the fears of people on Jeju about the American soldiers whom they occasionally encountered.

This video is significant since it describes a scene in the ill-fated village of Bukchon on Jeju’s northern coast. Bukchon is memorialized for a massacre in which more than 300 villagers were hacked and shot to death by rampaging South Korean police and soldiers on Jan. 17, 1949, at the height of the revolt that cost the lives of nearly 30,000 people.

It was long before the massacre, months before April 3, 1948, as the woman recalls, that U.S. soldiers visited Bukchon in search of her uncle in order to use his services as a translator. The village people were afraid of these “ko-koon nom,” big-nosed people. The woman’s mother shouted, “You can’t take my child.”

The Americans, not finding the woman’s uncle, unloaded laundry detergent and C-ration cans from their helicopter as gifts. The woman remembers the pork in some of the cans was quite delicious.

More to the point, the encounter left her with the impression that these Americans, low ranking with little influence, were rather puzzled. They had no understanding of deeper issues and did not comprehend widespread fears of police and soldiers.

Beside her, another woman about the same age recalled seeing Americans on the streets outside a small base near the island’s southwestern coast. They sometimes handed out chocolate, much to her delight, she said, but that’s about all she could remember about them.

Above and beyond the village level, it would help to find answers to much broader questions about relations between Americans and Koreans. We know only that the U.S. military government was still in charge when the revolt broke out and that Maj. Gen. William Dean, commander of U.S. forces in Korea, visited Jeju after 4.3. In the absence of any records of what he said, it’s reasonable to suspect he encouraged the police and armed forces, under Korean command, to suppress signs of unrest.

In the quest for more on what the Americans were doing or saying, we should be looking for other aging residents with long memories of ancient encounters, however incidental or isolated. The old women’s stories, as told at the peace forum, may seem trivial but may also be emblematic of how the few American soldiers on the island saw their mission.

High-ranking officers, however, may have had a different view. We need to learn about their interaction with people ― and to see archival evidence of whatever they were saying to their superiors as well as Korean authorities.

We do know South Korea’s first president, Syngman Rhee, after taking over the newly independent government on Aug. 15, three years to the day after the Japanese surrender at the end of World War II, was eager to show off his resolve as a new leader. In that spirit, he ordered his forces to crack down much more severely than they’d been doing during the American occupation. The result was the chain of events that led to the Bukchon massacre and many others.

One regrettable aspect about historiography on Jeju is the revolt received virtually no coverage abroad or, for that matter, in the censored Korean media. We have heard that a correspondent for a Chicago newspaper may have written about the ongoing tragedy, but no one has seen his work. We have no idea if he was actually on the island.

One well-known journalist, Keyes Beech, then based in Tokyo, covered both the Korean and Vietnam wars for the Chicago Daily News. That once-distinguished newspaper has long since gone out of business but should survive in libraries in Chicago. It would be useful for an enterprising researcher to go through these files, in microfilm or print, in search of whatever Beech may have written. (His daughter, Hannah Beech, based in Bangkok for The New York Times, might also have suggestions.)

For that matter, the Chicago Tribune, for which I worked for five years as Far East and then U.N. correspondent, may have had a man in Japan at the time. That paper still publishes ― and may let a researcher check its files.

As we pursue the history of 4.3, it is not enough to assume the Americans were complicit simply because the U.S. military government was in control in South Korea until Aug. 15, 1948. The memories of two grandmothers are not only emotionally moving but also historically useful ― an intimation of much more to be gleaned from archival research and testimony.