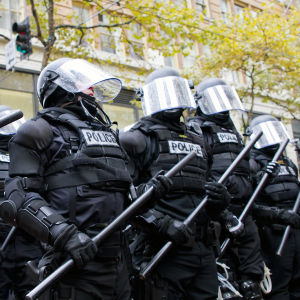 We Live in a Police State, and Our Legal System Is the Cause

Nationwide was not on an elderly Pennsylvania couple’s side in October, when an insurance agent mistook their hibiscus plants for marijuana and reported them to the police. A raid ensued, and police ransacked the couple’s home. Through it all, 66-year-old Audrey Cramer sat partly dressed and handcuffed in the back of a police cruiser for four hours.

In 2012, a SWAT team raided Bob Harte family’s Leawood, Kansas, home, holding the parents and two young children at gunpoint for two hours while police searched their house for marijuana. Why? Police observed Harte with hydroponic equipment he had purchased for his son’s science project. Police then rifled through the Harte’s garbage and found used tea leaves, which they “mistook” for marijuana.

Things have gotten so ridiculous in the search for victimless criminals that police have even taken to setting each other up, if only inadvertently. Recently, Detroit officers posing as drug buyers approached officers posing as dealers. They ended up brawling in the street. No actual criminals were even involved.

It’s easy to see how we got to this point. When crime goes from acts perpetrated upon clear and identifiable victims to behaviors that some of us simply don’t like, these sorts of things are bound to happen.

What also happens is a growing animosity between the people and the police sworn to serve and protect them. Recent estimates put the number of federal criminal statutes at 4,500, plus an additional 300,000 federal regulations. The list is so long that experts believe the average person unknowingly commits three felonies each day.

Add prosecutors, from U.S. Attorney General Jeff Sessions on down, who have a political incentive to be “tough on crime” and a police state results. Innumerable laws mean that police can arrest citizens almost at whim. Looking to advance their careers by racking up convictions, prosecutors pile on numerous charges and engage in coercive plea bargaining wherein they offer less prison time if the accused plead guilty to some of the charges. Often, even innocent people plead guilty rather than take the risk of being tried on numerous charges and losing.

According to a National Registry of Exonerations study, among people subsequently exonerated from drug convictions, almost two-thirds had pleaded guilty, and among those convicted of manslaughter, half had.

According to a recent Gallup poll, over the last five years, only 55 percent of citizens expressed either “a great deal” or “quite a lot” of confidence in the police. The meaning is clear: Either 45 percent of Americans are criminals, or there are more than 100 million law-abiding adults in this country who regard the police with, at best, indifference and at worst, enmity. This is most pronounced among black Americans, of whom only one-third report they trust the police.

We live in a police state and our legal system is to blame.

The law holds police to lower standards than regular citizens. Both prosecutors and judges give police a benefit of the doubt they do not extend to ordinary citizens. When going about their duties, police are legally protected by qualified immunity, making it all but impossible for citizens to hold them accountable in civil court. And when they are accused of wrongdoing, who investigates them? Other police. In our zeal to criminalize all manner of victimless behavior, we empowered the police then made them unaccountable.

The way to unwind this police state is to prohibit lawmakers from criminalizing any activity in which there is no clear and well-defined victim, to end coercive plea bargaining, and to remove the qualified immunity protections that shield police from the consequences of their actions.

The police shouldn’t be the enemy of the people, but to the extent that they are it is because we have made them so. We were complicit in building the police state, but with common sense reforms we can begin to unwind it.