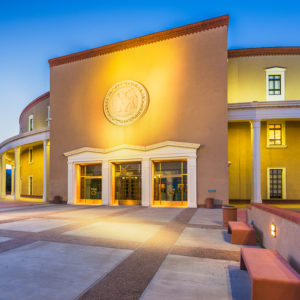 Lobbyists contributed nearly $600,000 to state lawmakers from both political parties in the five months beginning in May and ending in October, according to the New Mexico Secretary of State Office’s Campaign Finance Information System (CFIS).

All 112 members of the state Legislature will be on the 2020 ballot. Statewide elected officials, including Gov. Michelle Lujan Grisham, will be up for reelection in 2022.

Most of the legislative contributions came in the form of campaign donations of $2,600 each — with a large percentage coming from oil and gas lobbyists. This included more than $175,000 from energy industry behemoth Chevron USA, Inc., according to the financial reports.

“We make political contributions to both major parties to support the election of candidates who believe, like we do, in the value of responsible oil and natural gas development,” Comey said. “Our contributions are made in accordance with the law.”

Chevron donated to Lujan Grisham’s campaign and to dozens of Democratic and Republican lawmakers.

New Mexico is in the midst of an oil surge, largely due to drilling in the Permian Basin straddling southeastern New Mexico and west Texas. The state could be flush with oil money when the state’s legislative session begins in January unless prices unexpectedly plummet.

The state general fund revenue for the next fiscal year — which begins on July 1, 2020 — is expected to top current annual spending by $907 million, a surplus of nearly 13 percent. The state is also expected to have nearly $2.3 billion in reserves at the end of the current budget year.

Lujan Grisham’s administration and her fellow Democrats in the legislature are debating with GOP leaders over how the budget surplus should be handled.

At the annual conference of the New Mexico Oil and Gas Association last week, the governor praised the industry for its support of state government. Complicating the issue is that earlier this year, Lujan Grisham adopted an aggressive climate change agenda, the goal of which is to require public utilities to move to carbon-free energy generation by 2045.

Telecommunications lobbyists also spent significantly on contributions to both parties, according to the filings. Approximately $23,000 was spent on behalf of Sacred Wind Communications and $11,500 for AT&T.

The lobbyist reports cover a five-month period through Oct. 7. Legislative committees usually begin their work preparing for the next legislative session — which begins in late January —in this time period, when they study reports and view public comments on proposed legislation, according to the Albuquerque Journal.

In total, lobbyists reported spending about $539,000 on political contributions and about $52,000 on food and drinks, according to the filings.

Spending on meals included lobbyists picking up the tabs for legislative committees and also individual meals with legislators.

The Journal used lobbyist Carol Leach as an example, showing she reported spending about $316 on lunch at the Cattle Baron in Roswell for a legislative transportation subcommittee. The spending was on behalf of Concho Resources Inc., an oil and gas company that operates in the Permian Basin.

The filings also show that only a small amount of the reported spending was for entertainment or other costs.

Lobbying expenditures was a hot-button issue in the 2019 legislative session. A bill to ban lobbyists from making any expenditures on legislators while they are in session passed the New Mexico House 62-0 but was killed in committee by the state Senate.