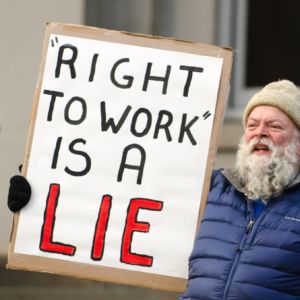 Kentucky counties opened a new battlefront in recent years by enacting their own local version of right-to-work. Now new states have begun to explore the policy.

Kentucky was successful primarily due to strong coalition building among national and local advocates. National supporters are now looking to assist local initiatives that are beginning to sprout up in other states. A recent appeals court decision essentially opened the floodgates for the policy to spread elsewhere.

“It’s a way to extend worker freedom to as many people as possible, as fast as possible, at a time when it may not be realistic in a lot of states,” AFP policy director Akash Chougule told InsideSources. “The second thing that we’re encouraged by, that we’re taking seriously, and there is an upside to it, is that effect in Kentucky, where it becomes a statewide issue.”

Warren became the first county in the country to enact a local right-to-work ordinance back in December 2014. An Illinois village already passed its own version of the ordinance, which is now pending in the courts. Delaware, Maine, Minnesota, and Ohio have also started to explore the concept.

“Obviously, it’s not going to be replicated perfectly elsewhere, but there are enough third party groups and politicians in other states that see the value in this,” Center for Worker Freedom Executive Director Matt Patterson told InsideSources. “I am very confident we can form successful coalitions in other states, and that’s what we’re in the process of doing.”

National and local advocates can also coordinate more effectively through building coalitions. National supporters can provide local advocates with expertise and resources. Local advocates are more familiar with the local laws and the people living there.

“That’s the process we’re in now, helping to form coalitions locally and in other places,” Patterson said. “In Kentucky, we were proud to be part of a pretty broad coalition. We had AFP, the Bluegrass Institute, local chambers were crucial, the state chamber, Protect My Check, and also the support of politicians.”

Kentucky senators Mitch McConnell and Rand Paul endorsed the policy early on. They argued the local ordinances allow counties to remain competitive, in an op-ed for the Bowling Green Daily News. Chougule notes each organization had their own talents they can utilize in the fight.

“We’re basically the muscle behind these fights, that’s how we look at ourselves,” Chougule said. “Our grassroots infrastructure gives us an unparalleled ability to do what we did in Kentucky, which is to knock on tens of thousands of doors, make hundreds of thousands of phone calls, educating people about what the issue is.”

The American City County Exchange (ACCE), in contrast, works more on the legislative side. ACCE is a division of the American Legislative Exchange Council. The conservative nonprofit drafts model legislation for a range of issues, including right-to-work.

“The policy that was adopted throughout Kentucky was based on our model policy that we developed,” ACCE Director Jon Russell told InsideSources. “We were happy that the sixth circuit held up our model policy, obviously there were a couple areas that got struck down so we’ll be putting out new model policy, hopefully in July during our conference.”

Right-to-work outlaws mandatory union dues or fees as a condition of employment. States typically decide whether to enact the policy making the local version a new legal frontier. The Sixth Circuit Court of Appeals essentially gave the all-clear to other states when it upheld the policy during a union lawsuit.

“The first and most important thing was the sixth circuit decision,” Patterson said. “I would say there’s been an appetite for this across the country  for awhile, but a lot of people just wanted to wait until the court weighed in before they moved.”

The United Auto Workers Local 3047 filed the lawsuit with the intent of making all the ordinances void. The lawsuit contested that only states have the authority under federal law to enact right-to-work. The court countered that federal law does not specifically forbid localities from enacting right to work. How states delegate their authority is actually what matters.

“Each state takes a different approach based on how the constitution delegates its power to local governments,” Russell said. “Based on the power and the type of ordinance that might get passed, the way in which we approach this is different. What worked well in Kentucky isn’t going to necessarily work well in Illinois.”

The Kentucky counties were able to pass the law because the state has what is known as a home rule statute. The statute allows counties to pass their own economic development laws so long as it doesn’t interfere with existing state law. Many other states have home rule statutes, or similar policies, that delegate certain powers to localities.

Lincolnshire, Illinois, enacted its own version of the policy, which is currently pending in the courts. Local unions filed a lawsuit against the local ordinance. District Court Judge Matthew Kennelly ruled that only states have the power to enact such laws, but an appeal is likely.

“If Lincolnshire is successful at the circuit court, then you have two separate circuit courts that have ruled in favor of local right-to-work,” Chougule said. “But if the seventh circuit rules against them then you have a split decision at which point it would go to the U.S. Supreme Court.”

Chougule believes they would have a good chance of winning if the policy actually made it to the highest court. He adds Lincolnshire really jumped on the issue early on. The village passed its local ordinance in 2015, way before the appeal court decision.

“You have Illinois which already had one town pass a local ordinance,” Patterson said. “That’s being litigated right now. Illinois is surrounded by right-to-work. There is a lot of pressure on local governments, especially in the border counties and towns, to have something like this to stay competitive.”

Russell notes the fights really have to come from the ground up. Local advocates have to be the driving force behind the local initiatives or it falls apart. The national organizations can then help support the local fights. Gov. Bruce Rauner tried to impose local right-to-work zones, but it didn’t go anywhere.

“It really has to come from the ground up,” Russell said. “It has to be a locally embraced and locally driven ordinance for it to succeed.”

Patterson adds its also important that the state has the right political landscape. State lawmakers could easily pass a law that forbids localities from enacting the policy. Republican control or a split legislature are ideal because the state would be less likely to block the local ordinances.

“You have to have some local leader or town council or county executive somewhere saying that’s a tool I want to use,” Patterson said. “The second ingredient is whether it’s possible in that state, and there are a couple of things that might make it impossible.”

Democrats and labor unions tend to be highly opposed to right-to-work laws. They contest the policy is merely an underhanded way of hurting unions. The local ordinances have also been facing fierce opposition from the left. Illinois Attorney General Lisa Madigan called the local right-to-work zones illegal.