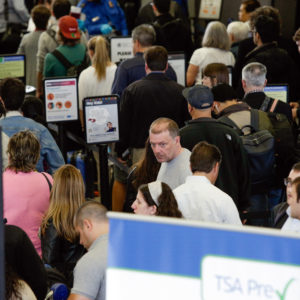 Like many responsible air travelers, Kelly Washam arrived at San Jose International Airport two hours before her scheduled departure time, but two hours later she found herself still waiting in the airport’s security line as her flight took off without her.

Washam isn’t alone. CNN reports air travelers across the country are now facing hours-long security lines at airports big and small. For instance, the Port Authority of New York and New Jersey wrote in a letter criticizing the Transportation Security Administration for its long wait times that average wait periods at John F. Kennedy Airport from March 15 to April 15 surged by 82 percent compared to just one year ago.

Former TSA Assistant Administrator Michael Restovich recently told NBC’s Dallas-Fort Worth affiliate the long lines are due in part to mandated security increases imposed in the wake of a 2015 investigation that revealed serious flaws in airport security. According to a federal report on that investigation, undercover agents were able successfully to sneak weapons through airport security in 95 percent of their attempts, a revelation that led to significant leadership changes at TSA and alterations to security protocols.

Those security changes are one of the primary reasons for increasing wait times, and CNN reports that Homeland Security Secretary Jeh Johnson says although TSA wants “to keep passengers moving,” long lines may be temporarily necessary to “keep passengers safe.”

While it’s undoubtedly important to ensure airport security systems are able to prevent armed terrorists from making their way onto airplanes, long security lines may put passengers at an even greater risk of attack.

Recent terrorist attacks — especially attacks perpetrated by individuals affiliated with ISIS — show at least some terrorist organizations are now targeting areas where they can inflict the greatest number of casualties possible.

On June 12, 49 Americans lost their lives and 53 more were injured in the tragic Pulse nightclub attack in Orlando, Fla. On June 28, armed gunmen stormed Ataturk Airport in Istanbul, Turkey, igniting bombs that killed 45 and wounded more than 230. Most recently, on July 3, a bomb exploded in a crowded shopping district in Baghdad, Iraq, killing at least 215 and wounding more than 170.

Each of these attacks, as well as those that occurred in Paris in November 2015 and in Brussels in March 2016, share common characteristics: In all the attacks, unarmed civilians were targeted, and the areas chosen were generally confined, crowded spaces without a significant armed security presence.

This profile matches the vast majority of U.S. airport lobbies and security checkpoints, where on any given day, hundreds or even thousands of people could be waiting for an hour or more while passing through security.

TSA officials say the only way to alleviate long security lines is to add staff, which would require additional government funding. TSA currently employs 45,000 screeners and has spent more than $70 billion since its creation. Because a significant chunk of its budget comes from fees assessed to air passengers when they purchase their tickets, long security lines — which could deter consumers from choosing to fly — may actually cause additional budget problems in the future, making future delays even worse than those experienced today.

According to a recent survey by the U.S. Travel Association, of the 2,500 people polled who said they planned on flying somewhere this summer, about one in five said they are considering alternative travel arrangements.

While some might argue the further expansion of TSA is the answer to reducing security wait times, a better policy solution would be for airports to hire approved, well-trained private security companies instead. In May, Rep. Darrell Issa, R-Calif., called on airports to consider participating in TSA’s Screening Partnership Program, which allows private security companies to take on the responsibilities normally belonging to TSA.

The benefit of using private security instead of a government-controlled agency is airports would be able to more easily fire poorly performing or lazy employees, and security companies that don’t work efficiently would be replaced by ones that could. Traveler satisfaction could also play a role in compensation, as it does in many other industries, making airport security a more consumer-friendly and safer operation than it is today.