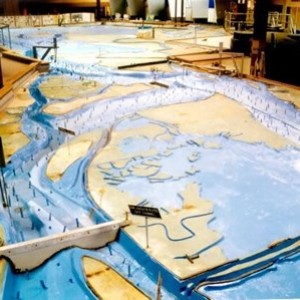 The Bay Model (photo via US Army Corps of Engineers)

Lost in our ‘Indefinite Optimism’

John Reber was crazy. At least that’s how many would describe him today.

In the late 1940s, Reber, a school teacher and theatrical producer, put forth his own plan to completely reshape San Francisco Bay. Reber believed that his plan would not only create thousands of jobs, but also open 20,000 acres for land development. Dams would create freshwater lakes to help solve California’s water needs. The Bay would host strategically-placed military bases. Transportation and shipping would be more efficient on water and land.

Reber gave presentations and spoke with editorial boards across California. He was able to get the public and Congress interested, and the US Senate Public Works Committee held hearings in San Francisco. Reber secured funding for the Army Corps of Engineers to construct The Bay Model, a 1.5 acre three-dimensional model of the Bay that simulates tides and currents. It still stands today and can be toured by the public. The model, however, demonstrated that the Reber Plan, with its many complexities, would create bigger problems that it would solve.

Still, in America today, Reber never could have made it so far. Leading newspapers and Congress would have no interest in listening to his ideas. The self-taught engineer would have been written off as a crank. While he may have ultimately been wrong, Reber offered the kind of plan that epitomized an era of raw American ambition that put a man on the moon and built a national highway system.

Peter Thiel, the entrepreneur who cofounded PayPal and was the first outside investor in Facebook, writes on Reber in his new book, Zero to One: Notes on Startups, or How to Build the Future. Reber embodies the spirit of “definite optimism” that was the force behind America’s greatness. Definite optimism is the belief that we know there is a better future ahead of us; we need to make bold plans to get there, but science, engineering, and business will soon eclipse past achievements. 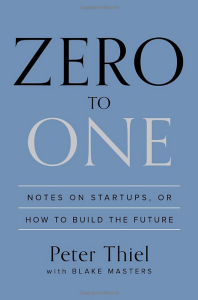 Thiel contrasts this with today’s indefinite optimism. This is the view that has dominated America since the 1980s. Will the future be better? Yes, but we don’t know how. Thus many of our country’s highest achievers build their careers around Wall Street’s big banks and management consulting. These serve important functions. But they are indefinite.

Wall Street knows it will be able to squeeze more money out of the economy. It doesn’t know exactly how, and thus it builds a diversified portfolio. Management consultants know they can make an existing business more efficient. But their task is not one of offering the big ideas that spawn new industries—it is squeezing more efficiency from old businesses.

And so is true of politics. We are wrapped up in eking more from government and the economy. Democrats want more taxpayer money to fund redistributionist policies created decades ago. Republicans want to continue the Reagan revolution of paring back government to a bare minimum. These are not grand visions to make this century better than the last. These are marginal improvements that allow us to sustain the lifestyles we’ve become accustomed to.

Republicans look ahead to the new Congress and call for repeal of the medical device tax, approval of the Keystone pipeline, authorization for LNG and crude exports, repatriation of corporate assets held overseas, and a halt to burdensome EPA regulations. These are all very good ideas and should be passed. But these are improvements for indefinite optimists.

The definite optimist will look to modernizing our tax code, reforming entitlements, and revamping our immigration system. These will lay the foundation to allow America to compete globally and will set us on a sustainable fiscal path.

Perhaps our greatest hope for a better future will come from newly-elected governors and state legislatures. They can look to pension, sentencing, and economic reforms that can be a blueprint for the nation. Most importantly, we must find a way to make American education the best in the world. It will take significant long-term planning, but our children need an education that prepares them for the new economy.

We face historic challenges, but in an earlier era of definite optimism, we could trust that our leaders would offer plans and find compromise. Indefinite optimists have preferred to maintain the status quo, with a few tweaks here and there.

We have not reached an end of history. New frontiers lie ahead. Paradigm-shifting visions will inevitably be met with early skepticism. Thus, if politicians make decisions based on poll numbers, we can expect, at best, the perpetuity of indefinite optimism. But we must plan for greater achievements. As Steve Jobs taught us, “The people who are crazy enough to think they can change the world – are the ones who do.”