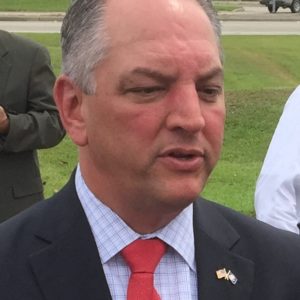 On Tuesday, President Donald Trump visited the $10 billion Cameron LNG export facility in Cameron Parish. Louisiana to celebrate the nation’s success in the energy sector. Many in the energy industry have voiced their support for the administration and its policies to make the United States “energy independent,” and contrasted it with the policies of Louisiana Gov. John Bel Edwards.

The oil and gas sector employs around 50,000 Louisiana workers and pays an average annual salary of $96,500 dollars.  And according to David Dismukes, head of the LSU Center for Energy Studies, the Gulf region’s shale boom has helped fuel billions of dollars in investment in Louisiana’s petrochemical sector.

Some of the same members of the energy industry who welcomed President Trump have decried the policies of Gov. Edwards, who is currently seeking a second term. Power The Future, a pro-industry organization, released a press statement accusing Edwards of working against the state’s energy sector and its employees.

“Governor John Bel Edwards is no friend of energy workers. Edwards takes credit for the state’s booming energy industry, but that boom is in spite of the governor’s efforts to stifle the industry, not because of him,” the group said. “Despite warnings that hundreds of jobs would be lost, John Bel Edwards coerced parishes into supporting a legal barrage against the energy industry, a lawsuit spearheaded by a law firm that raised $2 million to help get him elected.”

Edwards, a former trial lawyer, has pursued an aggressive strategy to get oil and gas companies to pay for the state’s state’s Master Plan to restore the Louisiana coast, which is losing a football field’s worth of land every 90 minutes due to erosion. According to a Wall Street Journal report, the Edwards administration efforts included “conscripting” coastal communities to join in mass legal action against energy companies or risk losing any future settlement funding.

Edwards employed outside counsel to represent the state, specifically the Talbot, Carmouche & Marcello firm, which has a 20-year record of suing oil and gas companies over environmental claims. He’s also worked to preempt the support or opposition of any anti-oil and gas legal action by local communities. These actions resulted in standoffs with Republican Attorney General Jeff Landry, parish presidents, and other local government leaders in areas of the state that rely heavily on the oil and gas industries for economic activity.

Ironically, Edwards has also faced criticism from environmental groups around the state over the construction of the 163-mile long Bayou Bridge pipeline between Lake Charles and St. James. Activists accused Edwards of not supporting their calls to cancel the pipeline project, arguing that he is not stringent enough on regulating oil and gas. These activists also argued the existing regulatory pathway to develop and open a new pipeline was not invasive enough. The pipeline opened earlier this year.

Edwards, however, remains adamant that he has contributed positively to the state’s energy sector. In an op-ed released to the media before Trump’s landing in Lousiana, Edwards highlights his administration’s record.

“Across our state, things are going well. We’re announcing new economic projects and investments in the tech sector, in manufacturing and, yes, in oil and gas,” he wrote. “President Trump will find a state that has struggled for years, with natural disasters and fiscal problems, among other things, but that is finally on the mend, thanks to hard work and bipartisan compromise.”

Given these cases, many across the state take issue with the governor’s record on energy development. Since Trump traveled to Lousiana to speak on contributions the state has made to energy independence, many pro-industry groups are handing praise over to the president over the incumbent governor.